Gold Coast optometrist Paul Graham has challenged practitioners not to gloss over the importance of binocular vision examinations for children, saying they are just as vital as eye disease diagnosis and treatment.

Paul is one of three optometrists who will speak at Optometry NSW/ACT’s Canberra Conference, Kids’ Vision 101; Building confidence with children in primary practice, at the National Gallery of Australia, Canberra on 13 October, 2019.

The conference brings a practical focus to diagnosing and managing common binocular vision disorders of the child and one of his talks will discuss why optometrists should hone their skills in examining children.

‘Building confidence in examining children improves your practice of optometry in general,’ he said.

‘Some people get uncomfortable seeing children especially if their practice is built around the older demographic. Others think it is a time issue, that they don’t have time to do the extra tests and others might not have the confidence initially to get it all done.

‘But once you have made it part of your routine, testing can be done quickly and is not a great burden on your time.’

Paul said that with a big emphasis on eye disease now, sometimes binocular vision could become glossed over but its importance should not be underestimated.

‘The quality of life issue may not feel so obvious but if visual dysfunction starts at school, a child may be put off engaging in close work, and this avoidance may survive throughout adulthood.

‘If you see children with these issues, it will give you a different perspective on how long an adult may have struggled and persisted with the same issues too.’

Paul said it was important to increase optometric skills in examining children because the potential cost to the child, practitioner and the profession for not doing so was large. For example, a child not treated for visual dysfunction may have their education affected and may not be able to join in activities to the fullest.

‘As practitioners, a lot more could be done and the profession also needs to do more and take ownership of the problem because there is not another profession as well positioned as optometrists to champion this aspect of paediatric vision care,’ Paul said.

‘It’s great that Optometry Australia has been championing children’s vision and helping to promote the confidence and skills of optometrists in this area.’ 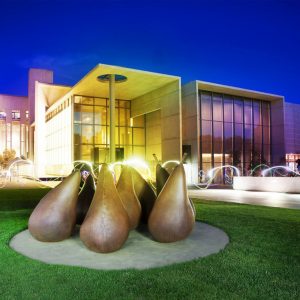 The National Gallery of Australia

In another talk, Paul will discuss why he does not get others to do pretesting and basic entrance tests as it is important to observe how a child does a test, rather than just think about the numbers and results.

‘Some practices might get technicians to measure acuity and other visual performance type tests but while this gives you a number, the optometrist doesn’t get to observe how the child used their vision during the test,’ he said.

‘Did the child read the chart easily or were they squinting or exhibiting other behaviours, even though they got it right, which might be just as valuable an indicator as a clinical test.’

Paul is well qualified to speak about paediatric practice as the practice he shares with Meredith Graham, Harmony Vision Care, has a special interest in treating children, with 70 per cent of patients aged under 17. Apart from standard paediatric examinations, Paul enjoys challenging contact lens cases and ortho-keratology.

Paul and colleague Liz Jackson will also lead a MEM retinoscopy workshop allowing optometrists to practise near retinoscopy techniques at the distance children spend most of their time.

‘Optometry often looks at how well people can see in the distance but most learning is done within arm’s reach,’ he said. ‘It’s most important to test at near and see how this changes over time.

‘The conference will be hands-on including talks, workshops, essential diagnostic skill updates and practical demonstrations of techniques and discussions. I like for people to go back to their practice, think about it, feel confident and practise what has been discussed.’

SooJin Nam will discuss how to accurately measure visual acuity in children and why how a child reads is just as important as what they can read, and when contact lenses are appropriate.

Registration is still open for the conference which attracts 18 face to face CPD points and lunch including a gallery tour.