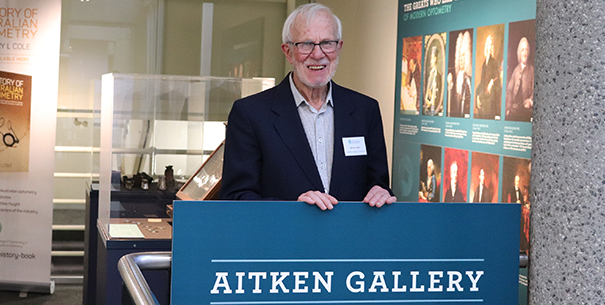 Michael Aitken at the gallery opening

Retired Melbourne optometrist Michael Aitken has been honoured by having a gallery featuring optometry artefacts named after him.

The Aitken Gallery officially opened last week, within Australia’s only optometry museum, the Kett Optometry Museum at the Australian College of Optometry (ACO.)

The museum was established in 1971 and contains spectacles, optometric instruments and equipment, books, art works and ephemera. The new exhibition space, Aitken Gallery, has been developed to allow more of the museum’s most interesting artefacts to be on public display, and to tell the story of the development of optometry.

Mr Aitken, who practised in Coburg for 35 years and retired in 1995, has been an honorary archivist for the museum since its beginning, and was the driving force behind the gallery.

He has contributed for decades to developing the collection and exhibition, donating artefacts and funds and was its principal donor. Mr Aitken was also a part-time lecturer at the ACO in subjective refraction and history of optometry, and a teaching clinician from mid 1960s into the 1970s.

The gallery shows a wide range of spectacles and other optical aids, from 18th century silver spectacles, through pince-nez and 1960s cats-eye fashion styles.

A detailed 1930s consulting room is part of the display of early optometry explaining the development of understanding of refractive errors and measuring vision.

A large variety of instruments are shown to highlight the development of perimetry, ophthalmoscopy and tonometry. A 1930s design slit lamp illustrates the longevity of the basic form of the slit lamp biomicroscope.

The broadening scope of twentieth century optometric practice is represented with exhibits of binocular vision, low vision, colour vision and contact lenses. The items on display represent less than 10 per cent of the items in the museum. 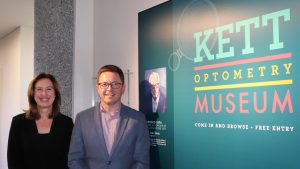 The Victorian Parliamentary Secretary for Health, Anthony Carbines MP opened the gallery on May 2, and presented a speech on behalf of the Victorian Minister for Health, The Hon Jenny Mikakos, MP.

Announcing the naming of the gallery, Australian College of Optometry CEO Maureen O’Keefe said: ‘I could not be more proud to open The Aitken Gallery, which has been named after Michael Aitken, honorary archivist, who has contributed tirelessly since the 1970s to developing the collection and exhibition, and donating significant artefacts and funds over the past 30 years to the Kett Optometry Museum.

‘Mr Aitken provided a generous donation towards the design and development of the new exhibition gallery which celebrates the history of optometry and its development in Australia, while being accessible and of interest to the wider community.’

She also thanked honorary archivists, Professor Barry Cole AO, Colin Bates, Pamela Sutton and former Optometry Australia CEO Joseph Chakman AM, and steering committee members, Clare Escott and Tenille Ryan, for their dedication and support, along with friends of the museum, donors and the designers, Thylacine.

A virtual online museum and app are under development to maximise accessibility to the exhibitions and collections, and to cater to a wide range of audiences and interests including optometrists, other eye health professionals, vision science students and the general community.

The Aitken Gallery is open Monday to Friday during ACO opening hours and is designed for self-guided tours. One of the honorary archivists can provide a guided tour by appointment.