A new advertising and awareness campaign by Optometry Australia is making pharmacists and pharmacy assistants more aware of eye symptoms which require a referral to an optometrist.

The campaign highlights the top five symptoms a pharmacist might be presented with which would best be referred to an optometrist for specific diagnosis. They are:

‘The highly targeted campaign aims to build deeper understanding among pharmacists of the eye conditions and symptoms that are best referred to an optometrist, and how the health practitioners can work more closely to give a complete picture of their patients’ eye health,’ she said.

‘The key campaign messages focus on the role of the optometrist and their expertise in diagnosing and managing specific eye health issues.’

Ms Scarf, together with media agency Media 33 which negotiated excellent value on Optometry Australia’s behalf, developed a schedule of advertisements to appear in six national pharmacy print and digital media outlets from February until August.

‘Early results show a promising start to the campaign, as we’ve far exceeded our projected impressions thus far,’ she said. ‘Pharmacy News seems to have had the strongest response out of our media selection to date.’

Optometry Australia’s National Policy Manager Skye Cappuccio said there was much evidence that patients benefited when referral pathways between health practitioners were strengthened.

Eye problems are a common reason for patients to seek pharmacist advice, with The Pharmacy Guild of Australia previously indicating that eye-drops are the sixth largest medicinal category in pharmacy. 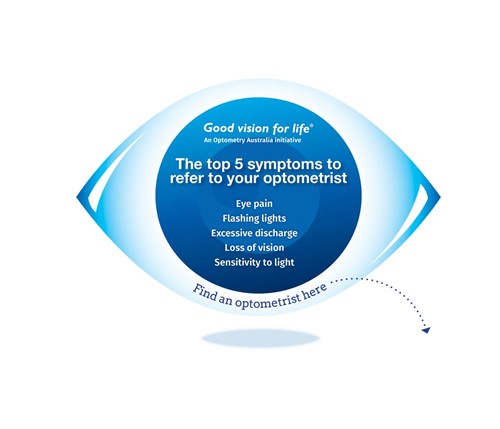 The campaign builds on previous work by Optometry Australia promoting collaboration between optometrists and pharmacists.

This included a sticky note eye-pad for pharmacists which highlighted red eye symptoms and an online course launched in 2016 by The Pharmacy Guild of Australia, Optometry Australia and Alcon Laboratories to help pharmacists manage eye conditions with non-prescription medicines, improve referral pathways between professions and highlight the expanded scope of practice of optometrists with more than half now being therapeutically endorsed and able to prescribe ophthalmic prescription medications.

Other initiatives included workshops for pharmacists focusing on common eye presentations and when to refer, and the Pharmacy Guild asking Optometry Australia to develop CPD content on dry eye for pharmacists.

The pharmacy/GP engagement evenings which include dinner, drinks, education and networking have proved popular and are continuing. This year’s events will focus on red eye management and working together in glaucoma care and are scheduled for 20 June in Port Macquarie, 4 July in Dubbo and 25 July in Nowra.