Dr May Ho with her Eye Health Hero award

Melbourne optometrist Dr Suit May Ho has received an international honour and been named an Eye Health Hero for her tireless work including training eye health workers in Vietnam, Cambodia and Timor-Leste.

May was among 22 people worldwide named as Eye Health Heroes for 2018 by The International Agency for the Prevention of Blindness (IAPB.)

The Eye Health Heroes initiative recognises and celebrates those whose work in the field and engagement with the community makes a difference in restoring sight and preventing blindness.

May is Global Education Program Manager with the Brien Holden Vision Institute and is based in Melbourne at the Australian College of Optometry.

A major part of her work has been helping to change the eye care landscape in Vietnam through her pivotal role in establishing two optometry schools there.

May and early career optometrist Anagha Joshi, a staff optometrist at the Australian College of Optometry, were the only optometrists who received the award this year. They received their awards on 16 September in Hyderabad, India at an IAPB Council of Members meeting.

‘It was nice that optometry was recognised and we got to talk for a few minutes which was a good opportunity to promote the role of optometry in blindness prevention,’ May said.

‘I was very pleased and proud to have received the award, especially because the Brien Holden Vision Institute nominated me but also because it reflects the work done by the rest of the institute team and people in the countries where we worked in partnership on these projects.’ 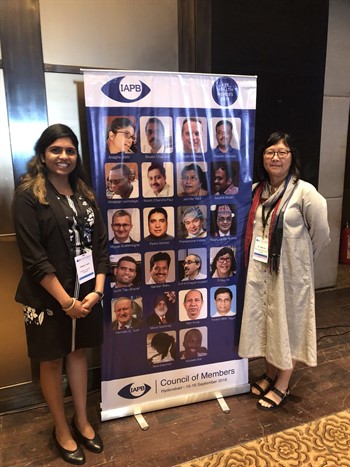 Anagha Joshi, left, and May Ho at the award ceremony with their photos on a banner of the 2018 Eye Health Heroes. Photo, Vision 2020 Australia CEO Judith Abbott

The first 13 Vietnamese trained optometrists will graduate in November and will work in private practice and hospitals, and next year another 70 will graduate.

‘There are only 12 other overseas-trained optometrists in the whole country,’ May said. ‘Ophthalmologists have been quite supportive. They have been knocking on our door to employ graduates.

‘We are trying to get the profession recognised by the Ministry of Health so these graduates can work in government hospitals.’

May studied optometry at the University of Melbourne and did her PhD there, working for 17 years at the ACO as a clinical instructor and seeing patients. She has worked for the institute for 13 years.

In her former role as program manager with the institute, May helped establish refraction training programs in Vietnam, Timor-Leste and Cambodia.

She helped train nurses in Timor-Leste in refraction and eye care skills in 2003, and in 2007 travelled to Cambodia with a Brien Holden Vision Institute team to help develop the National Refraction Training Centre in Phnom Penh.

In 2008, she worked with the two major eye hospitals in Vietnam – Ho Chi Minh City Eye Hospital and the Vietnam National Institute of Ophthalmology – helping to improve and revise refraction training and train the trainers, as a short-term strategy to address refractive error needs.

May then moved into establishing optometry schools in Vietnam to help address refractive error and primary eye care needs.

‘I would encourage optometrists, especially younger ones, to be involved in this kind of work and volunteer where they can,’ May said. ‘It’s great that Anagha has received this award at this stage of her career. The Institute needs lecturers and volunteer optometrists to help with international development.

‘Centre for Eye Health optometrist Jessie Huang spent 12 months in Vietnam volunteering as a university lecturer at one of the optometry schools, and Optometry Australia’s Policy and Standards Advisor Kerryn Hart previously volunteered in Cambodia.’

May is a member of many committees including Optometry Australia’s Low Vision Working Group, the IAPB’s low vision and school eye health working groups and children’s vision program and Vision 2020 Australia’s independence and participation committee which aims to improve the ability of Australians who are blind or vision impaired to participate in the community.

May is course manager and facilitator for a combined World Council of Optometry and Brien Holden Vision Institute-run global advocacy in eye health course for optometrists which is run online.