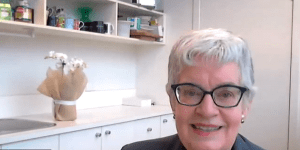 In seeking to #BreakTheBias, a challenge set by International Women’s Day 2022, Optometry Australia recently invited six female members to sit down and chat about their experiences of gender bias within optometry. You can see a summary of these in a video we launched on 8 March.

Former Optometry Australia President and member Helen Robbins spoke about the changes she has seen – and made – over the years.

Reflecting on how the landscape has changed since starting out in optometry, Helen said: ‘I think we should be looking at the way society has changed and the way our sector’s changed. Because there are some fairly major things that have been happening that I think really impacts on the way the profession works.’

When considering the changes that have been made to gender parity and gender bias, Helen notes that people no longer expect that their professional advisors are going to be male.

‘You have a doctor, a dentist, an optometrist, a lawyer – whatever you need – you pick those people because you have a connection with them, you know they’re good at what they’re doing, you’ve got a choice.’

This contrasts greatly to Helen’s experience years ago. She says: ‘We had a fairly recent graduate working there, and I worked there, and there was somebody who decided they really wanted to see a man. So, I said go for it – I’d been working there for years, I knew a lot more than he did.’

Helen has also previously been mistaken for the receptionist, with a patient answering every question with ‘I’ll tell him when he comes.’

When asked what her proudest achievements are in the face of bias, Helen says it’s the work she’s done on state and national council. ‘Although I didn’t take on those roles thinking ‘isn’t this fantastic, I’m going to be the first woman to do this job’. I did it because I’d been on the council for a while, I had some experience and I felt it was my turn to step up and take a bit of responsibility.’

Reflecting on her time as National President, Helen says she hopes she demonstrated that optometry thrives as long as good people are leading it, no matter their gender, and notes one important change she made while in office.

In accordance with the global theme for International Women’s Day this year, Optometry Australia is seeking to better understand areas where gender bias exists within optometry.

In launching the #BreakTheBias video, Optometry Australia wants to extend the conversation to its whole membership, inviting all members to complete a short survey.

Optometry Australia’s CEO Lyn Brodie said: ‘We are really excited by this initiative. We want to hear your voice and, most importantly, we want to work with you to drive change.’