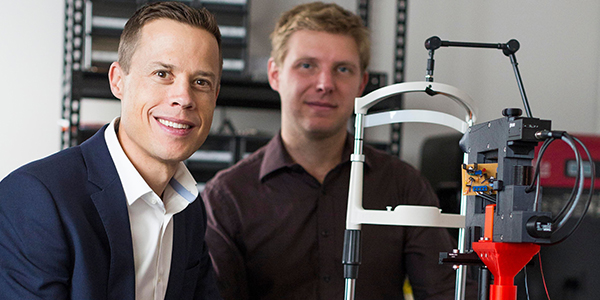 A world-first trial in Melbourne aims to develop a retinal scan to detect early signs of Alzheimer’s disease and researchers believe optometrists will be on the front-line using the technology.

Centre for Eye Research Australia (CERA) researchers received a major funding boost to fast-track their research enabling Melburnians to participate in the trial of eye scans based on imaging technology similar to that used in NASA satellites.

Deposition of the protein amyloid beta in the brain over many years is a characteristic of Alzheimer’s disease and recent research indicates that it also accumulates in the retina.

Using specialised colour imaging, cameras developed by the team at CERA aim to measure amyloid beta in the retina years before signs of cognitive decline.

The technology was developed by ophthalmologist Associate Professor Peter van Wijngaarden and mathematician/engineer Dr Xavier Hadoux from CERA and the University of Melbourne. Optometrist Flora Hui was involved in earlier stages and the group is working closely with optometrists Associate Professor Bang Bui and Dr Christine Nguyen and other researchers from the University of Melbourne Department of Optometry and Vision Sciences.

The Alzheimer’s Drug Discovery Foundation (ADDF), a partnership of American philanthropists including Bill Gates, will provide more than $600,000 for the research.

Professor van Wijngaarden said optometrists were at the frontline of eye care and this retinal imaging method could provide new insights into brain health.

‘There is currently no screening test for Alzheimer’s disease but retinal imaging might fill that gap,’ he told Optometry Australia.

‘It might be a screening test offered as part of a routine eye test by an optometrist, to identify where people are on the risk spectrum and monitor their risk over time. It could have tremendous value.

‘People at higher risk might then be referred on for further tests and potentially treatment trials.’ 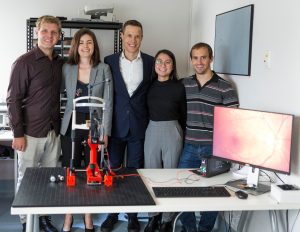 Professor van Wijngaarden said that currently by the time people present with symptoms and signs of dementia, the disease has been in progress for up to 20 years and many irreversible changes have already occurred. This scan could allow much earlier intervention, with potential for future drug treatments to prevent the disease, or delay its onset.

‘The eye scan would be quick, non-invasive and cheap, with no contrast agent needed. People at risk could then be referred for confirmatory tests including PET scans and lumbar punctures,’ he said.

Pilot studies have determined the scan can distinguish people with and without early Alzheimer’s disease and the next phase is a large validation study to determine how early the biomarkers can be identified.

The study, to start in August, will enrol 500 people from the Healthy Brain Project who are cognitively normal at baseline but whose relatives have dementia. The retinal imaging test will be compared with brain imaging, cognitive testing and cerebrospinal fluid biomarkers.

Healthy Brain Project investigators involved in the trial are neurologist Dr Nawaf Yassi from the Royal Melbourne Hospital, and Dr Yen Ying Lim of the Florey Institute of Neuroscience and Mental Health.

Professor van Wijngaarden expected it would be a few years before the technology could be available for use but said it was very promising and optometrists should ‘watch this space.’

He thanked a group of generous Australian philanthropists, including Baillieu Myer, Samantha Baillieu and Jeanne Pratt for supporting the research in its early stages.

‘They had the vision to back an idea out of left field. We are delighted to receive further generous support from the Alzheimer’s Drug Discovery Foundation to bring the technology to the clinic and patients,’ he said. 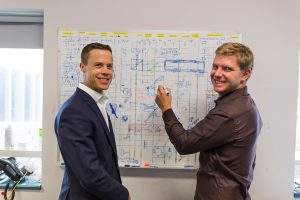