About one in six Indigenous Australians or 96,000 Aboriginal and Torres Strait Islander people a year are having eye examinations and this percentage is rising, according to a new report which reveals there is still a way to go to close the gap for vision.

The Australian Institute of Health and Welfare’s third annual report on Indigenous eye health measures was released on Tuesday, August 6, 2019.

Four states – NSW, Queensland, Victoria and South Australia – provided data on the number of spectacles dispensed to Indigenous Australians in 2017-2018. The amount dispensed in Victoria was closest to meeting the estimated number of Indigenous people aged over 40 who needed them — with an estimated 54 per cent having their needs met.

The report revealed that optometrists in the Visiting Optometrists Scheme (VOS) deliver nearly 30,000 occasions of service a year to Indigenous patients, and this more than quadrupled between 2009–2010 and 2017–2018. The majority were in the Northern Territory and rural Western Australia. 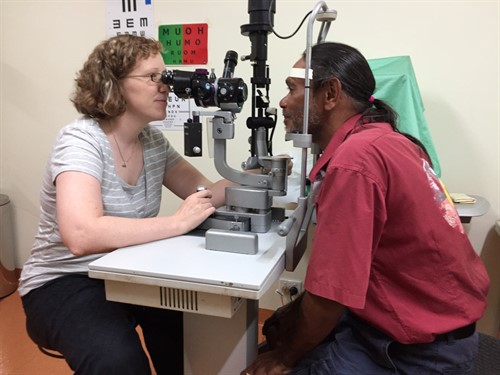 Optometrist Kerryn Hart does an eye examination on Andrew Toby who needed glasses. Andrew, a driver for the Anyinginyi Allied Health Clinic, Tennant Creek, collects patients to bring them to the clinic.

Vision 2020 Australia said the report was invaluable to the sector’s efforts to close the gap for vision, and contained critical data to help track progress towards this important goal.

Vision 2020 Australia CEO Judith Abbott said: ‘The report shows that progress continues to be made to close the eye health and vision gap for Aboriginal and Torres Strait Islander people, which reflects the hard work and commitment of many working in this important area.

‘However, too many Aboriginal and Torres Strait Islander people still experience vision loss that could be avoided through better access to eye testing, affordable glasses and timely treatment.

‘We think it is of fundamental importance that this collaborative strategy prioritises addressing concerning rates of uncorrected refractive error through ensuring national consistency across subsidised spectacle schemes.

‘It is also imperative that the importance of outreach service delivery is recognised and that initiatives to support the sustainability of the Visiting Optometrists Scheme are implemented.’