Parliamentary members, leaders in eye health and diabetes gathered at Parliament House in Canberra on 15 October to officially launch KeepSight.

The collaborative initiative, between government, not for profits, associations and the private sector, will encourage and remind all Australians with diabetes to have regular eye examinations.

KeepSight, initially announced in July 2018, was launched by The Hon. Greg Hunt, Minister for Health who described it as a “worthy investment” that will ensure “more people will seek earlier help and get better treatment”.

POTENTIAL TO SAVE SIGHT

The launch event was hosted by Professor Greg Johnson, CEO of Diabetes Australia, who said the initiative sat well within Diabetes Australia’s strategy to develop national complications prevention programs for people with diabetes.

“This is the first real example of a scalable, sizeable national complications prevention program focussed on blindness,” he said. 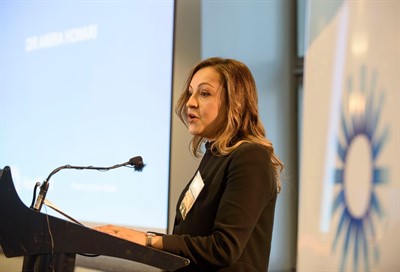 Dr. Amira Howari, optometrist and Diabetes Australia ambassador, spoke about the program’s potential to save sight. Both she and her husband live with diabetes, and as such, have first hand experience managing the condition.

“We need to remember that diabetes is complex and impacts on EVERY aspect of people’s lives making it at times very overwhelming to manage all their appointments,” said Dr. Howari. “As both a health professional and a patient I can be the first to say, this is often why many of us fall through the cracks of the health system. Life just happens…

“KeepSight is about making it easier for people to remember to get their eyes checked within recommended time frames by building a structure for systematic eye examinations. That means that not only will the person with diabetes see their optometrist or ophthalmologist, but once they are registered with KeepSight they will be given a reminder, either by letter, SMS or social media, to book in their next appointment.

TIME TO CLOSE THE GAP

“The vast majority of vision loss from diabetes is avoidable through early detection and timely management. We know that about 1.7 million people in Australia have diabetes and while all of them are at risk of vision loss and blindness, almost two thirds don’t know that diabetes puts their vision at risk.

Dr. Van Wijngaarden said, “countless studies have suggested that almost half all people with diabetes are not getting the eye test they need to protect their sight and as a result, diabetes is the leading cause of avoidable vision loss in working age Australians.”

He said if the trend continues, diabetes related vision loss will impact around 200,000 Australians by 2030.

HOW THE PROGRAM WILL WORK

Dr. Van Wijngaarden said the simple aim of KeepSight is to “close the gap” by getting the 50 per cent of diabetic Australians – 630,000 people – not currently engaged in eye care, to seek an eye examination.

Through KeepSight, Diabetes Australia will use the National Diabetes Services Scheme (NDSS) to contact all Australians with diabetes registered on its database.

There are three basic components to the program:

Diabetes Australia will coordinate the KeepSight program and be responsible for consumer engagement.

The program will be funded by the Federal government, which has provided an initial grant of AU$1million, and Specsavers, which has committed $1 million a year for five years. It is hoped that Federal government funding will continue following its first year commitment.

Dr. Van Wijngaarden said from the outset, measuring the impact of the program on health outcomes for Australians is a priority and this will be done with assistance from the Centre for Eye Research.

Speaking at the launch, Peter Larsen, Optometry Director for Specsavers Australia/ New Zealand said KeepSight was a once in a generation opportunity to save the sight of people with diabetes and that it was up to the stakeholders to “work together to create a solution that puts the patient at the centre of all action”.

Describing Specsavers’ efforts to increase screening for diabetic patients, he said the organisation has been working with the Royal Australian and New Zealand College of Ophthalmologists (RANZCO) to refine patient pathways, working with the GP College and is launching a health outcomes based training program for its optometrists. As part of its “Transforming Eye Health’ program, Specsavers has been providing individual benchmarking reports to over 970 Specsavers optometrists for 12 months. Mr. Larsen said these reports are now being further developed, “to articulate the diabetic problem, to enable optometrists to understand the prevalence of their detection and help them to improve their grading”.

Emphasising the importance of gathering and sharing data, he said Specsavers has seamlessly linked its practice management to Oculo which is linked to the  KeepSight portal. The data gathered as a consequence, will provide valuable knowledge for stakeholders, which can be used to evolve the program. Additionally, it will make it easier for optometrists to send relevant information to their patients to improve outcomes.

“In five years, we want someone to stand here and talk about how 2018 was the start of a significant foundation that demonstrated partnership between the private sector, NGOs, government and associations  in order to derive a better impact for Australians in healthcare.” He said the plan was not just to reduce the gap in diabetic blindness, but to eradicate it.

If Dr. Howari’s enthusiasm is anything to go by, KeepSight will be embraced by the eye health profession. “As an eye care practitioner, I’m excited about KeepSight. I’m passionate about saving people’s eyesight and this is a passion shared by Australia’s optometrists, ophthalmologists and orthoptists. We are ready and waiting to check the eyes of the 630,000 people with diabetes who aren’t getting their eyes checked and play our role in ending diabetes-related blindness within a generation… because if we can change the world for one person at a time, then we WILL make a difference.”

This article has been republished courtesy of mivision.