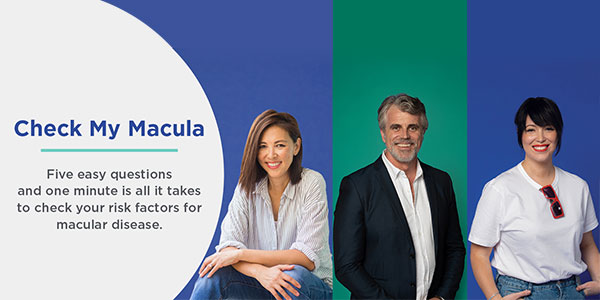 Only 10 per cent of Australians in their 50s can identify major AMD risk factors but optometrists can expect more in this age group to have macula checks after the launch of a new Check My Macula campaign.

The Macular Disease Foundation Australia launched the campaign last week and has sent a resource pack to about 2,000 optometrists to help them promote the campaign and manage extra appointments. The communications toolkit which includes digital content to share with patients, free resources and posters is also downloadable.

Check My Macula is a short online quiz that helps 50-something Aussies learn their risk factors for macular disease then book a potentially sight-saving eye exam with an optometrist. One in seven Australians over 50 has the early signs of age-related macular degeneration (AMD) – Australia’s leading cause of blindness – but they may not know it until it’s too late. The foundation launched the quiz to help people understand their risk of macular disease and the importance of regular eye exams.

The YouGov Galaxy polled 623 Australians aged 50-59 years online in February and revealed that only one in 10 Australians aged 50 to 59 can identify the major risk factors for AMD – age, family history, smoking and lack of regular eye exams. More than 80 per cent knew they should have an eye examination every two years. 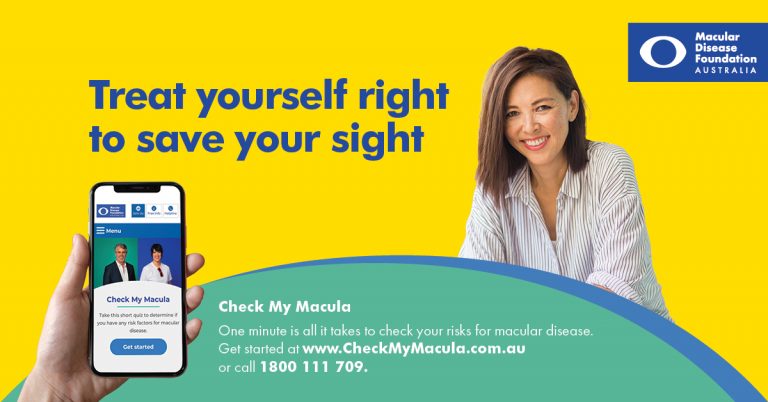 One of the posters available for optometrists to download

MDFA CEO Dee Hopkins said: ‘Even though they know this, almost 40 per cent gamble with their sight by skipping these exams. The Check My Macula quiz aims to remind Australians to add an eye exam, including a check of the macula, to the ‘shopping list’ of other health tests we’re told to tick off when we turn 50.

‘It makes personalised risk information about Australia’s leading causes of vision loss quick and easy to access. One minute, five questions and you’re done. You can learn about your risk of AMD and diabetic eye disease whether you’re on a phone or computer, sitting on the bus or waiting in a queue.

‘People in their 50s are part of the ‘sandwich’ generation, often juggling the needs of kids and elderly parents. It’s also the age when a lot of other health tests are required. Unfortunately, eye exams often get pushed to last on the list when people are time poor. Fifty-year-olds don’t feel old, and while they’re aware of AMD, they associate the disease with the elderly. They don’t realise that turning 50 is a key risk factor.

‘Check My Macula gives these people the information they need quickly. In less than one minute, they can find out their risk factors. They can then go on to find a nearby optometrist and book an appointment straight away.’ The survey found most (67 per cent) were aware age was a risk factor for AMD but:

‘What’s concerning is that the survey showed people who smoked in the past decade were half as likely to have had macula checks in the past two years (36 per cent, compared with 64 per cent of non-smokers,)’ he said.

Entertainer Shane Jacobson, who voices a television commercial promoting the campaign said: ‘If you’re over 50 and you don’t know your risk factors for macular disease, you’re at risk of going blind. It’s that serious.’ 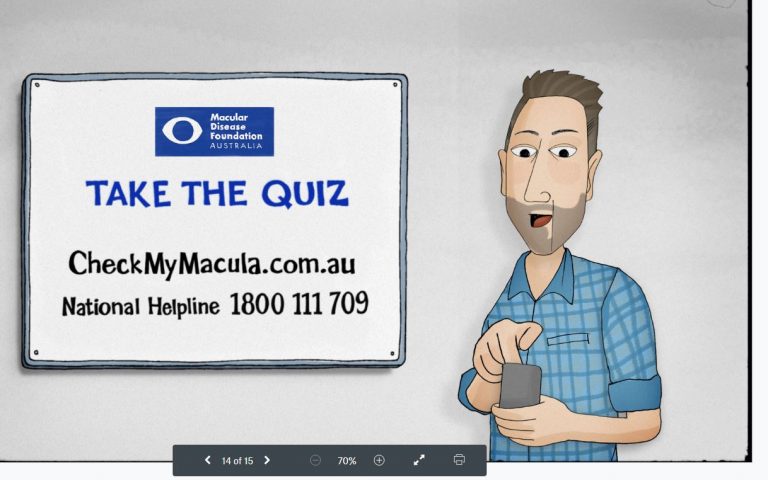 A snippet from the advertisement

Long-time MDFA Ambassador Jean Kittson – who voices the ad alongside Jacobson – has a direct family history of macular disease. Her mother Elaine, now in her 90s, has lived with AMD for more than 30 years, which means Jean has a 50 per cent of developing the condition.

‘Now I’m in my 60s, there’s a lot to check: my hearing, my skin, my eyesight, the list keeps growing but because of my family history, I do make sure that I get an eye exam and macula check every year,’ Jean said.

TV host and radio broadcaster Chris Smith was just 52 when he was diagnosed with AMD.

‘That was a shock,’ he said. ‘It obviously upset me a lot, but it’s stabilised, and that’s a good thing. The earlier they can get in and help you, the better it is.’

Metals in eye could contribute to AMD

Meanwhile, the authors of new Australian research released last week say their findings support the hypothesis that accumulations of toxic metals in the retina could contribute to the development of AMD.

Researchers examined the eyes from seven tissue donors and found several toxic metals were taken up by the human retina and optic nerve.

Optometry Australia members can read our 2019 Clinical Practice Guide for the Diagnosis, treatment and management of Age-Related Macular Degeneration and earn 3 CPD points or two hours of CPD after 1 December, 2020, by watching our webcast recording on our Institute of Excellence about AMD – an update on best practice.