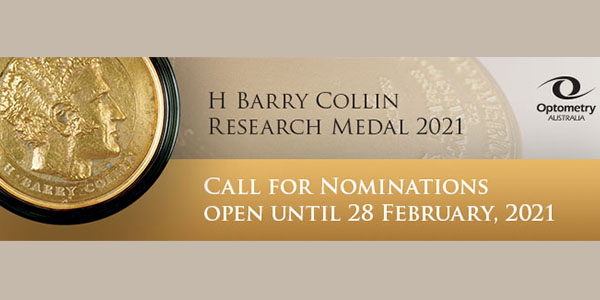 Optometry Australia is calling for nominations for the 2021 H Barry Collin Research Medal.

The prestigious medal recognises outstanding contributions to the advancement of knowledge in optics, vision science or clinical optometry by a person who is an Australian citizen or a graduate of an Australian optometry school, or who has done a significant part of his or her research in an Australian institution.

The medal is accompanied by a monetary prize of $5,000 and the recipient is required to submit a paper for publication in Optometry Australia’s journal, Clinical and Experimental Optometry.

The award is named after distinguished optometrist, academic and researcher, Emeritus Professor H Barry Collin, who was Editor-in-Chief of Clinical and Experimental Optometry for nearly a quarter of a century. Professor Collin received the Order of Australia for services to optometric education in the South Pacific.

Recipient of the 2020 medal, Adelaide optometrist Professor Konrad Pesudovs was the 14th recipient of the award for his outstanding contributions to the area of ophthalmic outcomes research incorporating optical, visual and patient-centred measurement into the holistic measurement of outcomes of eye care. 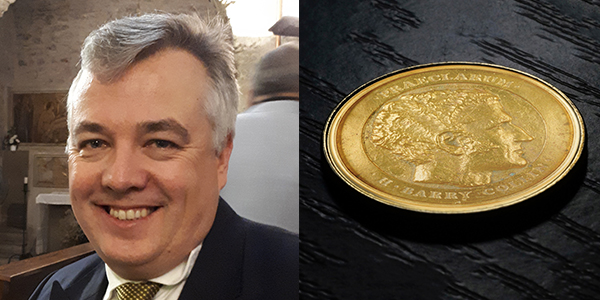 Nominations can be made by a single person or group and must include details of the name, position, qualifications and contact details of both the nominators and nominee. A curriculum vitae and overview statement of no more than 1,500 words on the nature, scope and importance of the research by the nominee is also required. Additional information about the nomination process is available here.

The recipient of the 15th award will be announced in August 2021. Nominations must be received by February 28, 2021 to Optometry Australia Publications and Digital Manager Jess Donald via email, j.donald@optometry.org.au or mail to Jess Donald, Optometry Australia, P.O Box 1037, South Melbourne, Vic, 3205.

All past original research papers are freely available to read in the H Barry Collin Research Medal Virtual Issue on the Wiley Online Library.