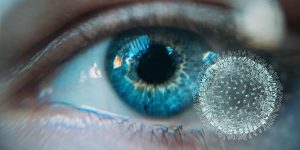 Doctors have reported the first case of permanent loss of visual acuity which ‘may have been induced by SARS-CoV-2.’

They said the ability of SARS-CoV-2 to induce serious ocular disease had been unknown.

‘To our knowledge, this is the first reported case of inflammatory ocular neuropathy that was associated with uveitis, may have been induced by SARS-CoV-2, and resulted in permanent loss of visual acuity,’ they wrote online in JAMA Ophthalmology.

They said it had previously been known that cases of SARS-CoV-2 could induce conjunctivitis and asymptomatic nonneuropathic retinal lesions. Also the virus had been found in tears.

‘Moreover, in animals, other coronaviruses can cause conjunctivitis, anterior uveitis, retinitis, and disc neuritis,’ they wrote.

‘It is notable that although initial disc edema was moderate to mild in this patient, it led to severe atrophy. Other viruses (eg, varicella-zoster virus) have also been reported to have this effect.’

On the second day after admission, she developed blurred vision and redness in one eye and temporary (eight-day) pain when mobilizing the globe. They found her best corrected visual acuity was hand movement O D and 6/6 OS.

One and a half months after symptom onset, visual acuity remained hand movement OD. A clear cornea and anterior chamber or vitreous inflammation regression were observed and a fundus examination showed severe papillary atrophy.

‘While central nervous system involvement (eg, meningo-encephalitis) has been reported in patients infected with SARS-CoV-2, it could not explain these findings because cranial magnetic resonance imaging had clear results,’ they wrote.

‘While it remains possible these findings were idiopathic, the temporal association between SARS-CoV-2 infection and the ocular manifestations and the lack of relevant history support the possibility that SARS-CoV-2 caused the neuropathic ocular inflammation in this case.

‘This case suggests that COVID-19 manifestations may include isolated inflammatory optic neuritis that leads to permanent visual acuity loss. To limit the functional consequences of ocular neuropathy in patients infected by SARS-CoV-2, it should be diagnosed and treated early.’