If Anne Gibson’s botanical paintings are anything to go by, she has an amazing eye for detail.

Anne, a retired optometrist from Mitcham in Melbourne’s eastern suburbs, has swapped a slitlamp for graphite pencils and watercolour paints to pursue her hobby. She combines her passion for Australian native bush and art in meticulously detailed life-like botanical paintings that can take months to complete.

‘I really enjoy painting and find it very meditative and relaxing. Having been an optometrist, I guess I have an eye for detail and am analytical. I like the shape of things, perhaps from the science background,’ Anne said.

She sketches in graphite then paints over parts of the illustration in watercolour. Snapping the lead of a mechanical pencil and then using the edge gives a very fine line, enabling her to draw minute details such as veins on leaves or intricate hair-like wisps protruding from banksia cones.

Since 2008, Anne has exhibited her paintings in Australia’s foremost exhibition of botanical works,  The Art of Botanical Illustration, at Domain House Gallery in Melbourne’s Royal Botanic Gardens. The exhibition is held every two years. Artists must pass a selection process to have their works chosen. Anne’s works have been displayed in every exhibition since she began painting.

‘There is a natural history exhibition held in the years in between, for which I am drawing birds photographed on our camping trip last year to the Kimberley,’ she said.

Times have changed since Anne graduated from optometry at the University of Melbourne in 1971 when, despite topping the clinical results for her year, she was unable to find employment because she was engaged to Tony Gibson, an optometry graduate in the year above her.

‘Go and have babies’

‘I was in tears as no-one would employ me because I was engaged. They said: “You will just go off and have babies,” Anne recalled. She and Tony solved the dilemma by buying Geoff Henry’s practices in Camberwell and Mitcham.

They called the practice ‘A and A Gibson’ and as husband and wife, worked in partnership for 37 years until Anne retired.

‘I loved optometry and I don’t miss it until I pop back in the practice. Since retiring, I have time for all the other things I love such as painting, gardening, bushwalking, camping, sailing and spending time with our grandchildren,’ she said.

‘Tony has reduced his hours to three days a week and we sail on Wednesdays and weekends.’

Tony and Anne were among Victoria’s first therapeutically endorsed optometrists. They went to Boston, Massachusetts, 16 years ago to complete the practical component of the course as there were no options available for them to undertake clinical placements in Australia.

‘We wanted to extend our practice and be able to fully manage our patients instead of having to send them off and risk losing them in the system,’ she said.

The practice is still a family business. Their optometrist daughter Riki joined the practice shortly after her mother retired and took over many of her mother’s patients, and their other daughter Kim, a landscape designer, works there as a receptionist. Murray Smith also practises there.

Anne Gibson had always drawn and sketched. Fifteen years ago she overheard patients at the practice talking about local botanical watercolour classes. This piqued her interest and she enrolled in Nature in Art classes with artist Terry Napier at Park Orchards Community House.

Terry Napier says Anne is enormously talented, has a great eye for detail and is passionate about native plants.

‘I think being an optometrist gives her a greater insight into detail because she is used to looking at such fine detail in people’s eyes and working in close confines, which helps focus in tiny areas.

‘She sketches in grey-lead pencil base then lays watercolour paint over the top of some parts. Tiny brushes that have, as my wife says, 12 hairs from the armpit of a mouse are used for detail.’

‘I love sketching and am comfortable with my doodles but adding watercolour paint to the mix is another thing entirely. Terry’s knowledge of the characteristics of different colours is so helpful,’ Anne said.

‘I am not as patient or particular as a lot of botanical painters and more often than not, I draw directly onto paper rather than transposing via a light box or tracing paper.

‘I love my native plants, particularly the Mallee eucalypts; the look, the smell and the beautiful imperfection of them. Painting them really makes you look properly at them; you learn a lot more about the plant and appreciate its intricacies.’

‘A few years ago we went up the Birdsville Track and beyond. I brought back lots of photos of nature including beauties of eagles so I am planning to paint some of them,’ she said.

Her home studio houses collections of gumnuts, feathers, cones, leaves and other native bush material collected while bushwalking, and the Gibsons’ block, which is just over half a hectare, has been planted with natives so there are many exhibits on hand to paint.

Her works are sometimes displayed at the practice and patients often ask where they can buy them. The sale of paintings subsidises the cost of materials. 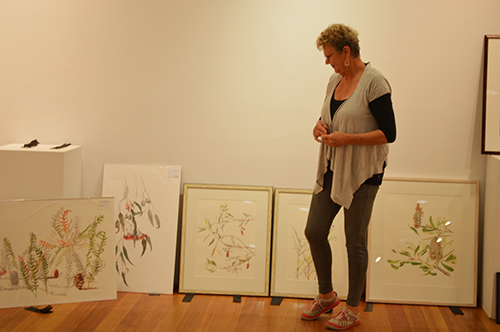