A new slitlamp fundus lens developed by Flinders University is easier to use and provides a sharper view of the fundus than existing lenses, its developers claim.

The gold standard precision Watkins Lens is named after its inventor, Rod Watkins, an associate professor at Flinders University Optometry and Vision Science.

Professor Watkins, who has spent most of his life designing optical systems and ophthalmic equipment, has won several awards for his designs. He said this lens was one of the simplest he had designed.

‘I think the lens is likely to take off in optometry practices. It could become a universal way for examining the fundus,’ he said.

The lens has been on the Australian market for several months and is now in use in America.

It is easier to use due to deep knurling, which makes it easier to hold, the working distance is comfortable for the practitioner and patient, and the housing is designed to easily clear the patient’s facial features.

Both the entrance and the exit pupil are large, so lens alignment with the patient’s pupil and with the slitlamp is less critical.

All optical surfaces have a high performance multi-layer anti-reflection coating to minimise reflections in the image.

Vignetting of the patient’s pupil is taken into account to provide maximum image quality right to the edge and the fundus image is bright, as all of the light is converged into the slitlamp.

Professor Watkins said it was convenient because it provided a wide-angle view of the fundus as part of regular slitlamp examination.

‘If the technique can be made substantially easier to learn, it has so many advantages over other methods of examining the fundus as slitlamp examination is more convenient for patient and practitioner,’ he said.

‘It has advantages over direct and indirect ophthalmoscopy because you don’t have to get so close to the patient.

‘The first time Flinders University optometry students used a fundus lens, they found the learning process longer because the lens had to be held a precise distance from the patient’s eye and centred on the pupil. The technique takes some learning and experience to become confident in its use.

‘Many other fundus lenses have high surface reflections, and image quality through the lens is fine in the centre but not as good as you move away from the centre.

‘The image quality is better with the Watkin Lens. The lens we use is the same design concept as that used in instrument eye pieces, so we’ve incorporated the technology from optical system eye pieces, but used it the other way around. It looks at the retina as an object and forms an image in front of the eye,’ he said.

Professor Watkins said the lens was easier to use for people not familiar with the procedure. In 2014, 30 Flinders University optometry students used the lenses for the first time. Comments from those students led to minor changes to the optical design, and students in 2015 used an updated version, he said.

Several of the Flinders optometry graduates learned with existing products and compared them with the Watkins Lens, resulting in a change to the new lens due to ease of use and quality. Optometrists in the Flinders Vision clinic are also using the lens.

‘Flinders University Foundation Chair of Optometry and Vision Science, Professor Konrad Pesudovs, showed the lens at the American Academy of Optometry conference in October and there was much enthusiasm,’ Professor Watkins said.

Professor Pesudovs also visited several American universities including the University of Houston College of Optometry and showed them the Watkins Fundus Lens as a potential alternative to the 78 dioptre lens they require for their state board examinations.

University of Houston optometry students compared it with existing lenses.

‘I trialled it with a class of their second year OD students and the majority thought it was better than a 78 dioptre, easier to use, with less reflections and a clearer view,’ he wrote in a Flinders University newsletter.

‘The college purchased some lenses for its equipment rooms and satellite clinics and we also donated one as a prize for student excellence in fundus examination. We will continue to work with the universities in the USA to distribute this gold class lens.’ 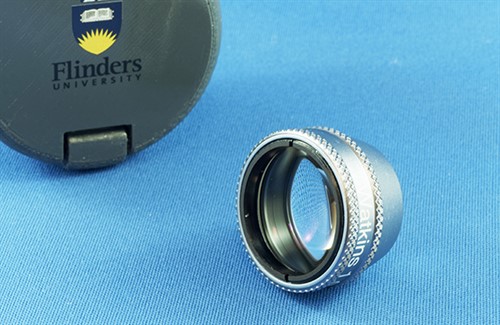