Optometrists will have the opportunity to be hands-on at the 2017 Australian Vision Convention, with workshops on foreign body removal and meibomian gland expression.

Ophthalmology trainee Dr Lindsay McGrath, who originally trained as an optometrist, will present the foreign body removal workshop at AVC, with practitioners offered the opportunity to hone their skills on artificial eyes.

Dr McGrath says the workshop will cover important techniques and different instruments that can be harnessed during the removal of a foreign body, as well as hazards that could occur during a procedure.

‘The workshop will help optometrists practise their skills, because it’s not necessarily something that comes in every day to your practice. Even though practitioners regularly use slitlamps, they’re perhaps not as practised at actually doing procedures on the eye with a slitlamp.

‘We’ll discuss some pitfalls of foreign body removal as well, so that practitioners can recognise that it’s not always straightforward. Foreign bodies are not always appropriate for optometrists to remove and injuries can be bigger than anticipated, so we’ll discuss when to fix those up and when to refer on.

‘Foreign body removal is an important skill for an optometrist to have, especially in rural areas, and with the increasing amount of pathology optometrists are seeing, more people are therapeutically qualified.

‘It’s a pretty simple procedure once you learn how to do it, but it offers the patient significant benefits because it’s much easier for a patient to see an optometrist rather than ophthalmologist and it’s much cheaper. Importantly, it harnesses all the skills that optometrists already have,’ she said.

Dr McGrath graduated from optometry at QUT in 2005, before undertaking a medical degree the following year at the University of Queensland. She was a board director with Optometry Queensland Northern Territory for two years.

She became fascinated with eyes during her optometry degree and is still guided by the basic principles of optometry in her medical practice.

‘Everybody knows that their vision is the most important thing in life, and patients say it to you all the time. Being able to help people, whether in optometry or ophthalmology, to preserve or improve their sight is such a gift.

‘It always comes down to doing the least invasive thing first, so if a patient presents with a problem, you try to fix it as simply as possible, and if that means fixing it with glasses, contact lenses or eye-drops, that’s always going to be a lot better than a more invasive operation. It always comes back to that basic principle, which I learned in optometry,’ she said.

AVC will be held at the Marriot Resort and Spa in Surfers Paradise on 22-23 April. The education program incorporates 25 speakers, with the opportunity for registrants to gain 43 CPD points.

The AVC line-up includes a Dispenser Program on 23 April, which offers practice staff an educational component, focusing on current industry issues and research. Optometrists are encouraged to bring along dispensing staff members, with one per registrant able to attend for free. Additional tickets for this session can be purchased by contacting the OQNT office. 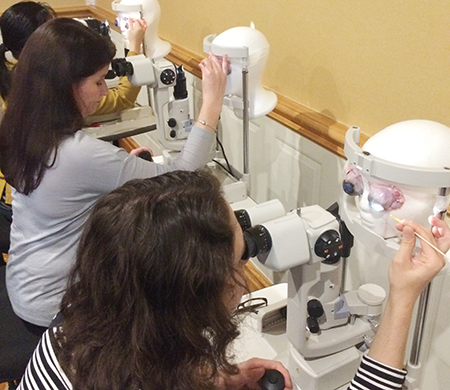