You are here: Home > News > Latest updates & news > Many delay help, and other news in brief
Read time:

While 46 per cent didn’t seek help because they didn’t feel they needed it, 20 per cent didn’t know where to find help. Some acknowledged it took time to realise that reduced vision was not normal, and for others recognising they needed help was the most challenging part. 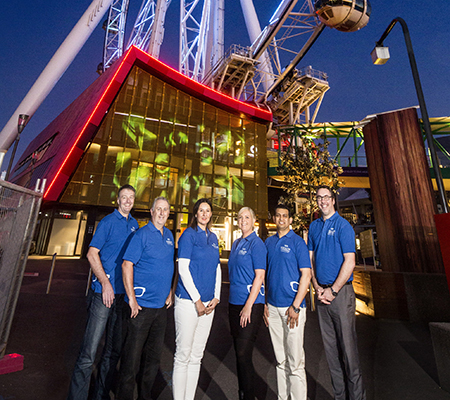 Essilor lit up two Australian icons for World Sight Day on 13 October, one metropolitan and the other regional.

George and Matilda in Mudgee

The practice, previously part of the Eyecare Plus group, has been operating since the 1920s.

All state and territory winners receive a bursary of $10,000 for projects that benefit rural Australia such as an overseas study tour, developing pilot programs and community initiatives. The national winner and runner-up selected from state winners receive a further $10,000 and $5,000, respectively.

The American Academy of Optometry has awarded a 2016 student travel fellowship award to Seyed Hosein Hoseini Yazdi, a sessional academic and PhD student from Queensland University of Technology School of Optometry and Vision Science.

The award, funded by an education grant from Johnson &amp; Johnson Vision Care, will enable him to attend the academy’s annual meeting in Anaheim, California on 9-12 November.

Exercising after a meal boosts diabetes benefits, according to a New Zealand study published online in Diabetologia.

The study in adults with type 2 diabetes found that going for a short walk straight after a meal was better for people with diabetes than exercising at any time. Participants who took a 10-minute walk immediately after each meal reported significantly lower blood glucose levels than those told to walk 30 minutes a day.

The authors suggested these glucose-lowering benefits could lead to reductions in insulin requirements.

Blindness caused by age-related macular degeneration is declining in Australia despite AMD remaining the nation’s leading cause of blindness, a new survey shows.

The National Eye Health survey of 4,836 people identified that the prevalence of blindness and vision impairment has declined.

‘The work to build awareness of macular degeneration has resulted in 86 per cent of people over 50 in the “at risk” group having had a macula check in the past two years, up from 33 per cent in 2007 and 69 per cent in 2014,’ Macular Disease Foundation Australia CEO Julie Heraghty said in a media release.

The report, by the Centre for Eye Research Australia and Vision 2020 Australia, was released on World Sight Day, 13 October.

Transplanting stem cells into the area next to the cornea could be an effective treatment for corneal damage but how well the transplant works depends on the number of stem cells transplanted.

US researchers reported in Biophysical Journal on 18 October that they had found that the softness of corneal cells indicates their potential for stem-like activity, including the ability to self-multiply and turn into different types of mature cells.

A major cause of visual loss and blindness is damage to limbal stem cells and previous research found that a certain amount of limbal stem cells, which replenish the cornea, are needed for successful corneal autologous therapy.

Limbal stem cell transplantation has been approved in Europe for the treatment of corneal damage but success depends on the number and percentage of limbal stem cells in tissue grafts.

Growth in Australia’s spending on health remains slow despite health spending reaching 10 per cent of Gross Domestic Product for the first time, a new report shows.

The Australian Institute of Health and Welfare report Health expenditure Australia 2014-2015, released on 6 October, revealed that $161.6 billion was spent on health goods and services in 2014-2015.

This was $4.4 billion or 2.8 per cent higher for recurrent and capital expenditure combined, for health spending in real terms than in 2013-2014, but it was the third consecutive year that growth had been below the 10-year average of 4.6 per cent.

Institute spokesman Dr Adrian Webster said the figures suggested that while growth in health spending was slow, it was faster than growth in other areas of the economy.

The first Australian study into the perceived genetic and genomic educational needs of allied health professionals, nurses and midwives is underway.

Researchers want to hear from allied health or nursing professionals working in New South Wales who are from a range of backgrounds and have any level of experience.

Optometrists willing to have a face to face or phone interview for 30 to 60 minutes can contact Romy Kerr from the Centre for Genetics Education, NSW on 02 9462 9591 or email romy.kerr@health.nsw.gov.au.