A model eye capable of simulating the organ in a human head is helping to train optometry students.

Second- and third-year Flinders University students have been using the device, which resembles a human eye, to learn practical skills in retinoscopy and ophthalmoscopy.

The team that developed the device says it can simulate refractive errors and changes in pupil sizes. It intends to add pathology examples such as diabetic retinopathy, age-related macular degeneration and peripheral retinal degeneration so students can scan and identify conditions.

Two academics from Flinders University’s School of Optometry and Vision Science led the creation of the device: Professor Rod Watkins and senior lecturer Alex Jaworski. They worked closely with Scan Optics, a manufacturer of ophthalmic equipment.

‘It’s used to get students through the initial training sessions so they know how to use the devices before moving onto people. As far as I know, there’s nothing else like this available,’ Professor Watkins said.

‘The second-year practical class is scheduled, and third-year students are able to book I-VRN, the eye simulator, on a voluntary basis for self-directed revision. It has helped students prepare for their assessments,’ she said.

The idea for the device arose in March when staff reflected on student difficulties during practical training.

‘We wanted something that could mimic a patient and make it more lifelike than the eye simulators presently available.  I spoke to Professor Watkins and asked, “Can you do it?”’ she said.

Professor Watkins had a similar idea in mind for the optic subjects he teaches.

‘It’s odd if you think about it. Optometry around the world is taught without anything that actually looks like an eye in a person’s head. It’s all theoretical and abstract. I wanted to be able to show students what the image of a point on the retina looks like,’ he said.

Professor Watkins designed the optics for the device while Gary Lowder, a product designer from Scan Optics, worked on the industrial design.

‘Because it’s a compact size, we’ve been able to mount it on a head shape and put testing frames over the head. You can change the focus of the back image to simulate someone with shortsightedness,’ Mr Lowder said.

‘There are only half a dozen of them at the moment, but most of the competitors’ devices are big and clunky.

‘It was good fun to help the university and make something that benefits students.’

In June, once the first prototypes were complete, several iterations were trialled with students to perfect the device. Ms Jaworski has since used the final versions for clinical training.

‘We were able to get access to the eyes for clinical training just after the start of the semester. We’ll be able to have it better integrated within the class next year and still continue volunteer sessions for independent study,’ she said.

Ms Jaworski is considering using the device for retinoscopy assessment, expanding it from a purely learning tool.

‘At the moment we haven’t used it for that purpose, but it could be. We might incorporate it into fourth-year revision classes next year as well.’ 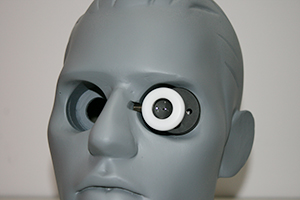