GPs received a valuable update on ocular disease and what optometrists can do, at a Royal Australian College of General Practitioners conference last month.

Optometry Australia’s national clinical policy advisor, Simon Hanna, told doctors at the workshop that 48 per cent of the nation’s optometrists are therapeutically endorsed, allowing them to prescribe 45 topical eye medicines available on the PBS and as private prescriptions.

He explained that drugs which therapeutically endorsed optometrists can prescribe include anti-infectives, steroids and NSAIDS, anti-glaucoma, anti-allergy and cycloplegic medicines.

Mr Hanna spoke about professional collaboration between GPs and optometrists at GP16, the RACGP’s National Conference for General Practitioners, on 29 September in Perth. His workshop centred on how inter-professional engagement and management of eye conditions can work best for patients and their eye health.

‘Feedback was great. A number of delegates commented that they realised how much they needed to go back and review when it comes to ocular disease,’ Mr Hanna said.

‘Others were interested in how they can work with their optometrist to ensure better overall care for their patients when optometrists are prescribing medication, and several doctors were keen to understand and know more about new diabetes items for GPs and how they can play a role in collaborating with their local optometrist if they choose to start screening for diabetes.’

Former RACGP vice-president Dr Eleanor Chew tweeted some of the glaucoma statistics Mr Hanna quoted, including that half of glaucoma patients are unaware of their condition, and that people with a first degree relative with glaucoma are eight times more likely to develop the disease.

Mr Hanna told the workshop that glaucoma patients could be managed independently by optometrists or in shared care with an ophthalmologist.

He spoke about common eye conditions and the role of the GP, and explained optometric qualifications in Australia, how patients do not need a referral to see an optometrist, that there is generally little or no waiting period for appointments and that optometrists will fast-track referrals to ophthalmologists if necessary.

‘Seventy-five per cent of vision loss is preventable or treatable, and 80 per cent is caused by five conditions: AMD, diabetic retinopathy, cataract, glaucoma and under-corrected or uncorrected refractive error,’ Mr Hanna told the workshop.

‘Encourage your patients to get tested, especially if there is a family history of eye disease, they are over 40 years, have diabetes, have noticed a change in their vision or are of Aboriginal or Torres Strait Islander descent.’

He explained when to refer corneal foreign body removal to optometrists and ophthalmologists, when to refer or treat red eye, and red flags for an eye emergency.

Mr Hanna covered the GPs’ role in preventing diabetic retinopathy, how to use new MBS items for retinal photography which come into effect on 1 November, and how optometrists can help with the retinal examination if GPs cannot get a good image.

He distributed a new GP resource devised by Optometry Australia, which advises GPs on the best use of the new MBS items and how they can work with optometrists to help them screen patients for diabetic retinopathy.

GPs can download a free copy of the Guide on the use of Digital Retinal Photography MBS items or obtain it by emailing policy@optometry.org.au.

Optometry Australia also has an Optometry GP Resources web page with information including a GP fact sheet and the guide for the use of digital retinal photography.

The workshop and resources complement a new advertising and awareness campaign to be launched soon by Optometry Australia, which is aimed at increasing GPs’ understanding of the role of optometry. 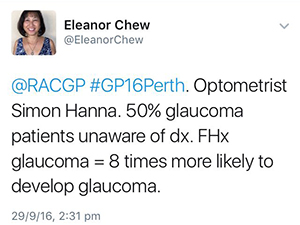