Ms Machon says the event is a platform for Optometry Australia to discuss with Members of Parliament issues that are important to optometry, including continuation of funding for the Visiting Optometrists Scheme past 30 June 2017 and Medicare rebates for patients.

‘It was gratifying to see that MPs from all political parties are committed to improving Australia’s eye health including closing the gap for Indigenous health. We were able to talk to MPs and other decision-makers from the Department of Health to highlight the importance of programs that support those issues, including the Visiting Optometrists Scheme,’ Ms Machon said. ‘MPs were also interested in the impact of the Medicare indexation freeze on optometry services.’

The survey was conducted at 30 test sites in rural, regional and metropolitan areas, with more than 4,800 people having their vision assessed for the project between March 2015 and April 2016.

Ms Machon says the National Eye Health Survey has communicated to parliamentarians that optometry and ophthalmology are working together with a focus on remote areas, to improve Australia’s eye health.

An important message from the survey is that uncorrected refractive error remains the nation’s top cause of vision impairment. The survey also provides insight into Indigenous eye health.

‘It’s great to see an increase in the numbers of Aboriginal and Torres Strait Islander people accessing screening for diabetic retinopathy, but the report has highlighted a still significant gap between the levels of retinal screening accessed by Indigenous and non-Indigenous Australians with diabetes,’ Ms Machon said.

‘It was very encouraging that the Members of Parliament realise that the National Eye Health Survey has been a collaborative effort, with optometry having made an important contribution in the capture of data,’ she said. 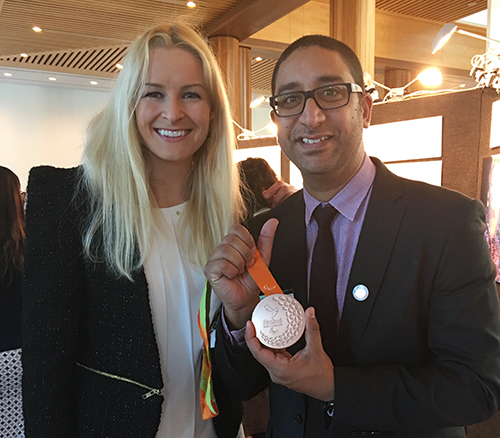