The blindness rate in Indigenous communities has more than halved in nine years and is on track by 2020 to reduce to the same rate as in non-Indigenous Australians, new data show.

It notes the important contribution that optometry is making to Close the Gap for Vision across Australia.

Head of the University of Melbourne’s Indigenous Eye Health, Laureate Professor Hugh Taylor, launched the update in Perth on 30 October at the Royal Australian and New Zealand College of Ophthalmologists annual scientific congress.

The university’s Indigenous Eye Health team developed the Roadmap and provides backbone support for the collective efforts which have led to the drop in blindness rates. The team and its work began in 2008, and the Roadmap was launched in 2012 and is now active in 37 regions covering more than 60 per cent of Australia’s Indigenous population.

‘This is a very encouraging improvement but more needs to be done,’ Professor Taylor said in a media release. ‘With on-going work from all stakeholders, we are determined to close the gap for Indigenous vision by 2020.’

He said the update showed progress was being made on every recommendation in the Roadmap but ongoing systems reform and some increased funding would enable better service delivery.

Trachoma elimination programs engineered by the University of Melbourne team along with Indigenous leaders, partners and community members, are also part of the successful formula.

‘We are the only developed nation with endemic trachoma. It is found only in Indigenous communities. We need more timely reporting of data to allow more intense targeted intervention in hot spots,’ Professor Taylor said.

‘There is also a need for cross-portfolio activity orchestrated by the Department of Prime Minister and Cabinet to ensure functional and safe bathrooms in these communities.’

Mitchell Anjou, Senior Research Fellow, Indigenous Eye Health, the University of Melbourne, said that despite several challenges optometry was facing, including new and changing fund-holder arrangements for VOS, reduced support through Medicare billing and inadequate and limited subsidised spectacle schemes, the 2017 Roadmap update noted the important contribution optometry was making to Close the Gap for Vision across Australia.

‘There is great leadership being demonstrated through optometry organisations, including Optometry Australia, and the special efforts of a number of optometrists in each state and territory to ensure optometry continues to find ways to improve Aboriginal and Torres Strait Islander eye care,’ he said.

‘Thank you to those optometrists providing Visiting Optometrists Scheme services, to all those practitioners who work from within Aboriginal Medical Services and to my colleagues who work behind the scenes with organisations that prioritise care and systems for Indigenous patients.

‘Optometry is leading the commonwealth-funded equipment and training roll-out to increase retinal screening rates for patients with diabetes, and optometry’s skills and commitment to engagement with Aboriginal health sector and primary care are going to continue to reduce avoidable blindness.’

Mr Anjou said that those involved in Aboriginal and Torres Strait Islander eye health met at a national conference in March 2017 and committed to close the gap for vision by 2020. A follow-up national meeting is planned for March 2018.

‘Optometry must continue to grow consultation service levels, improve access to spectacles and be involved in regional and jurisdictional stakeholder groups as our voice and activity is critical to achieve this goal,’ he said. 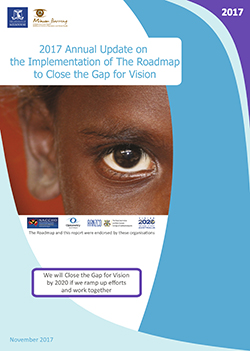