VISIONaries: Past, Present and Future is an annual event that honours those who have worked tirelessly for the profession.

The media medal is awarded ‘for the outstanding contribution to optometry by a media professional or media agency’.

Optometry QLD/NT CEO Cathryn Baker said Ms Shaw had dedicated almost three decades to making a difference in ocular health, by assisting in the distribution of quality and vital information and optometric news to optometrists across Australia. 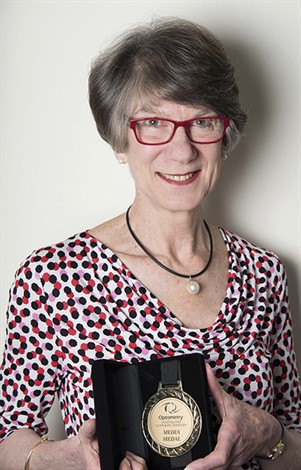 Three other awards were presented at the event.

The Hamlyn R Brier Clinical Optometry Award was presented to optometrist Ian Kent for being heavily involved in the profession, holding positions such as Optometrists Association councillor for eight years and chairman of the Queensland Registration Board for nine years.

He has also been honoured with the QUT Faculty of Health Outstanding Alumni award. 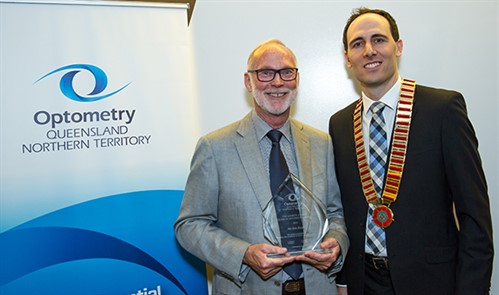 Winner of the Young Optometrist of the Year, Alexander Ng, has been actively involved in the QUT Health Outreach Educational Program and the Aboriginal Outreach Program. He is a dedicated supervisor of students in the QUT Optometry Clinic.

The Professor Sydney BJ Skertchely Award was awarded to non-optometrist Adrian Carson, CEO of the Institute for Urban Indigenous Health.

Mr Carson facilitated the employment of a team of optometrists within an Aboriginal Community Controlled Health Organisation, and established full-scope optometry clinics within 15 Community Organisations in south-east Queensland.

Outgoing president David Foresto officially handed over the Chains of Office to incoming president Dr Stephen Vincent and the new board of directors was announced.

The event was attended by 114 people, including 44 of Queensland University of Technology’s 53 graduating optometry students.

Four groups of past graduates from QUT/QIT celebrated their 10, 20, 30 and 40 year reunions and were presented with medallions.