Melbourne optometrist Amy Giang has been praised for her quick thinking that saved the eye and possibly the life of a little girl.

Ms Giang’s prompt actions ensured Emily Walsh was diagnosed with retinoblastoma and had started chemotherapy within five days of her optometric consultation.

Her actions are evidence of the valuable public health role that optometrists have, showing that they are not just spectacle prescribers and proving how an eye examination can save a life. They also remind practitioners of the responsibility they have.

This year in the United Kingdom an optician was charged with negligent manslaughter after the death of an eight-year-old boy.

The UK Crown Prosecution Service will allege that the optician should have detected papilloedema during a routine eye examination in the boy four months earlier. If found guilty, the optician faces a maximum gaol term of life in prison.

Ms Giang had only three years experience after graduating from the University of Melbourne and was working at Eyeclarity, where she has been employed since leaving university. On 27 August 2014, four-year-old Emily and her parents Karen and Stuart attended the Melton practice.

Karen had noticed a white pupil glow in Emily’s left eye when she looked in certain directions. On searching the internet and reading ‘eye cancer’, she called Eyeclarity, which scheduled an immediate appointment for her. The previous weekend, Emily had had conjunctivitis but no pain or complaints. Ms Giang found vision was normal and there was no significant prescription on retinoscopy. The front of the eye looked normal and the lens was clear. 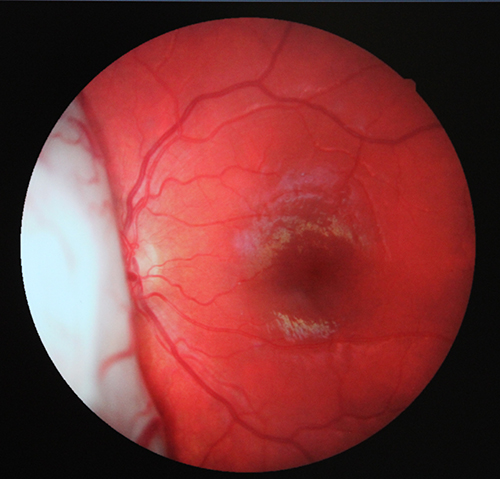 ‘I took a fundus photo and showed her parents who immediately recognised the urgency of the situation,’ Ms Giang said.

‘I explained the situation and asked if he could see her that day or the next,’ she said.

‘I wasn’t able to export the fundus photo to him immediately so I took a photo on my phone and texted him the shot. When he saw it, he booked her in for the next day.

‘I couldn’t sleep that night worrying about it.’

‘It was really lucky with how everything happened and accessing the specialist so quickly,’ Ms Giang said.

‘Luckily the tumour was away from the macula and next to the optic nerve but not invading it and fortunately cancer had not spread to the rest of her body.’

Emily’s last treatment was in January 2015 and she has been in remission since February, before starting preparatory school. Professor McKenzie said she had coped well with starting school despite the therapy. ‘She has some vision loss in the affected eye, about four lines, possibly due to the chemotherapy, and a scar at the back of her eye but she doesn’t need glasses,’ Ms Giang said.

‘When you realise the treatment saved her eye and her life, that’s a small price to pay.’

Professor McKenzie said the hereditary form of retinoblastoma, which usually affects both eyes and is characterised by multiple tumours, was often detected early as people knew to look for it.

‘The non-hereditary sporadic form which has a tumour in one eye and which Emily had, is quite hard to pick up because it is behind the pupil and most present at a late phase,’ he said.

The timely detection was a potential life-saver as Professor McKenzie said it would have been a very aggressive tumour if it had started to grow outside the eye.

He said it was important that optometrists recognise tumours could occur in young children and that if a child did not have good vision in an eye, optometrists should have a high index of suspicion and use drops to look inside the eye in appropriate circumstances.

Direct contact with an ophthalmologist for such high priority cases was vital, he said.

At four years, Emily was older than the usual age of two years for unilateral sporadic presentation and one year for germ-line mutations. He said young children who may be difficult to examine must be adequately examined or referred for examination under anaesthetic if needed.

‘Early detection has meant Amy has not only saved this little girl’s eye but more importantly, her life,’ he said.  ‘It also shows how much of an important role optometry can have in the community.’

Emily, who turned six years in November, recently returned for an appointment with Ms Giang for a repeat referral.

‘It’s quite a miracle story. All our family is so pleased with the treatment Emily has received and how Amy acted. She was just outstanding,’ Mrs Walsh said.

‘Emily has been to hell and back enduring six months of chemotherapy but it’s all been worth it as the treatment has done the job and she’s doing fantastically well. We’re the luckiest people. The other children in hospital had one eye removed and [doctors] were trying to save the other.

‘For the amount of chemo she had it’s amazing she can see out of the eye at all.’

Mrs Walsh said wearing sunglasses outside to reduce glare was a small price for Emily to pay, as was losing her long hair. Her father, grandfathers and uncles let Emily shave their heads in support.

Ms Giang’s advice to other optometrists in similar situations is to keep their emotions in check, ensure urgent referral, and take fundus photos and clinical notes.

She ensured immediate referral, recorded thorough clinical notes and followed up with the patient.

‘I wanted a quick response because I felt it was suspicious,’ she said. ‘Having a fundus shot helped especially being able to show her parents and explain why it was so urgent.’

Emily with her father, Stuart Walsh