The Essilor Vision Foundation completed its first school screening in Toowoomba on 13 May, with 84 children checked.

Preparatory to year six students from Harlaxton State School had their visual acuity and colour vision tested. Twenty-nine were referred to an optometrist for a comprehensive eye examination. Indigenous children comprise 50 per cent of the school’s students.

Essilor Vision Australia/New Zealand CEO Greg Johnston says that after two months of planning, he is delighted with the outcome of the screening day.

‘Everyone is really happy with the results and in particular the school principal Maxine Lester is over the moon,’ he said. ‘The process is now to liaise with the school and make bookings with optometrists for the students who need further examination.’

Students who require prescription glasses after consultations with optometrists will have them provided by the Essilor Vision Foundation free of charge.

Ms Perng says the screening will be life-changing for some Harlaxton State School students and beneficial for her professional development.

‘We referred around 35 per cent of the children onwards to get a full eye exam. If any of the children who needed glasses ended up getting them, it’s important, because it’s sort of an early intervention and it will make a huge difference in their lives.

‘It was good practice for our clinical skills and just learning how to interact with children, how to keep their attention and what sort of techniques you can use to keep them happy and entertained as well, because it can be quite intimidating to have a big person testing their eyes.

‘You have to change things, add a few stickers and funny jokes, and the children really seem to appreciate that,’ she said.

Sixty-four children at Toowoomba’s Holy Name Primary School had their eyes tested on 17 May, of whom 24 were referred for a comprehensive eye examination.

The Essilor Vision Foundation conducted screenings in five New Zealand schools. Of the 659 children screened, 210 were referred to an optometrist for a comprehensive examination. Sixty-three pairs of prescription spectacles were dispensed free to children who required them. 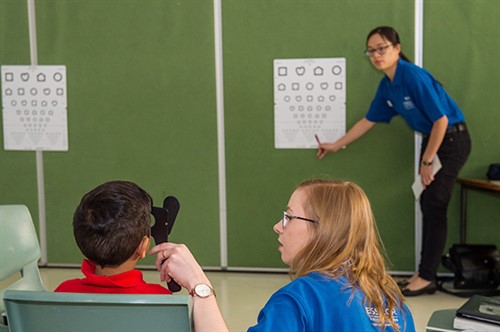