Heavily discounted stock prompts a flurry of sales in the final weeks leading up to the closure of Optometry Australia’s Online Store.

The Online Store, as it is known now, was originally established as the bookshop when the then Australian Optometrical Association (AOA) purchased the Optometric Book Company in 1989.

Natalina Bortone, who many members know as “Natalie”, started working at the AOA national office in Carlton in 1985, and went on to become the bookshop manager, a position she has held for 29 years.

‘Originally, Brian Layland’s wife, Jeanette, was running the Optometric Book Company, and I took it over from her when the AOA purchased it,’ Natalina said. 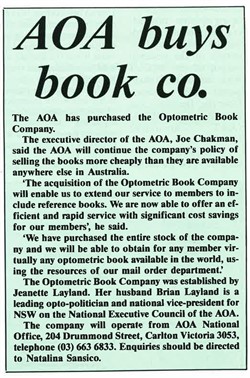 A clipping from Australian Optometry newspaper in August 1989

Back in the ’80s, everything was done manually, as there was limited technology in the AOA office.

‘We typed invoices manually, there were no credit cards, everything was done by hand,’ Natalina said.

When computers were introduced in the office, Natalina said she learnt computer skills on the job.

In the ’90s, as the bookshop expanded, it went ‘on the road’, with a booth at major optometry conferences, including Southern Regional Congress in Victoria and Australian Vision Convention in Queensland.

When the organisation’s name changed to the Optometrists Association Australia in 1998, the bookshop became known as the OAA Bookshop. 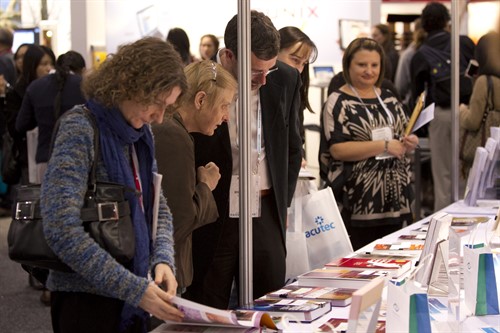 Natalina said certain books have been perennial favourites over the years.

‘Before therapeutics was introduced to optometry, the most popular books were Kanski’s Clinical Ophthalmology: A Systematic Approach and Wills Eye Manual: Office and Emergency Room Diagnosis and Treatment of Eye Disease by Bagheri, Wajda, Calvo &amp; Durrani,’ she said.

‘When therapeutics was legislated, I worked with publishers to stock the most relevant books to support therapeutically endorsed optometrists.’

‘Our most popular book on therapeutics is Anterior Eye Disease and Therapeutics A-Z by Bruce &amp; Loughnan.’

‘Sometimes members have contacted me to ask for certain books which I have then sourced from publishers.’

‘I remember I received one unusual request from a member in Tasmania for a book on dog’s eyes,’ she said.

Over time, the bookshop branched out to stock accessories such as eye models, display stands, posters, and bags, and was rebranded as the Online Store.

Natalina said she deals with about a dozen publishers.

‘Our biggest book suppliers include Lippincott Williams &amp; Wilkins, an imprint of Wolters Kluwer, and Elsevier Australia,’ she said.

We would like to say thank you for being a part of our family.
We are very grateful for your continued patronage because
we would not be here without loyal customers like you.
You could have chosen any other business, but we appreciate
that you have stuck with us.
Testimonial from Wolters Kluwer

When the Online Store permanently closes on 30 June, the organisation will also be farewelling Natalina who has resigned after 33 years at Optometry Australia.

‘I would like to thank Optometry Australia’s members and their office staff for their loyal support over the 33 years,’ Natalina said.

‘I thank them for their dedicated support at state conferences because without their support OAA Bookshop, as it was known then, would not have been able to return year-after-year and have a display.’

‘And to the practice managers and office staff placing orders over the phone who I have gotten to know, I also thank them for coming through to me with their orders,’ she said.

At a 27-year celebration for Natalina in 2012, she was recognised for selling over 11,000 books from the then OAA Bookshop.

Dr Philip Anderton, then a faculty member at the University of New South Wales, provided the following testimonial:

Many, many years ago I worked with Natalina as an agent for the OAA Bookshop. I would collect information on book requirements for all the students, and send it to Natalina in Melbourne. She would order the books, have them sent up to Sydney and the students would collect them from me at the beginning of the next academic year. Natalina was polite, efficient and went out of her way to solve the numerous problems that emerge in such a large task involving many students. Eventually the local University Bookshop became the prime supplier of ophthalmic texts, however the OAA bookshop continues to play an important role as a provider of important discipline-specific texts that are not used in the undergraduate courses.

A drop in member demand for optometric books and eye-care brochures led to a decision to close Optometry Australia’s Online Store.

CEO Lyn Brodie said a review had highlighted a significant decrease in sales over the past few years.

‘An assessment of member demand, combined with a highly competitive retail environment and increasing distribution costs, has led us to the difficult but financially prudent decision to close our optometric Online Store,’ Ms Brodie said.

‘With expenses starting to out-strip revenue, we believe that we can no longer continue to divert members’ funds into keeping the store open,’ she said.

‘We will continue to support members by ensuring that popular patient brochures are available for download from our website and that they have access to alternative sellers of optometric books and merchandise,’ Ms Brodie said.

Optometry Australia will continue to promote new optometric books on its website.

Members can continue to place orders on the Online Store until 30 June.