While the conventional treatment of eye hygiene and lubricants also significantly improved symptoms, the honey products improved the condition more and had an antibacterial effect, lowering Staphylococcus epidermis counts.

The project was specifically on meibomian gland disease induced dry eye, the most common cause of dry eye, but it did not cover every type of dry eye.

The Optimel products are the first therapeutic honey products regulated as a medical device for professional eye care in Australia.

The study in 114 people with evaporative dry eye due to moderate to advanced meibomian gland dysfunction (MGD) was published online on 6 June in Optometry Australia’s journal, Clinical and Experimental Optometry.

Significant improvements in meibomian gland expressibility and InflammaDry, which detects elevated levels of MMP-9 inflammatory marker consistently elevated in tears of patients with dry eye, occurred for both honey products.

Trial co-author, optometrist Associate Professor Katrina Schmid from Queensland University of Technology School of Optometry and Vision Science, said that while all treatments clinically and significantly improved dry eye, the honey therapies improved it the most and the gel was superior.

‘It’s a novel treatment for dry eye because it has both antibacterial and anti-inflammatory properties and has a different mechanism from those of other products,’ she told Australian Optometry.

‘Analysis of the eyelid swabs showed the honey products reduced both forms of staph colony counts, and although conventional treatment of eyelid scrubs can improve meibum quality which eventually reduces bacterial counts, the honey product had a much greater effect.

‘The trial has provided evidence of its benefits to patients with chronic, long-term and difficult to treat MGD,’ she said.

‘A  very small number of participants dropped out of the study because of adverse effects of stinging or temporary redness, which is known to occur with the honey treatment, but the majority of the participants’ eyes felt so much better that  they were prepared to put up with a bit of stinging because of benefits.

‘We know that we have to warn people about the transient sting on instillation.’

‘There is now strong evidence these honey therapies help in this condition, and more than standard treatment,’ she said. ‘Practitioners can suggest it to patients and know with confidence that they   will see a benefit and should get significant improvements over two months.’

Professor Schmid said she had received relief for her own dry eye from the product and used the gel before bed and during the day when needed.

She said it would be good to be able to follow users of the honey treatment over a longer time, for example five to 10 years, to see if the therapy affects progression of their dry eye disease, if patients continue to use less lubricants and if they continue with or abandon the combined treatment. 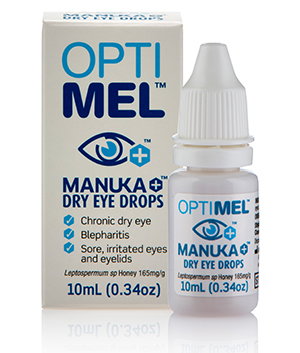 CEO of Melcare, the company which produces Optimel, Anthony Moloney, said the drops were for less severe, mild to moderate dry eye, while the gel was for moderate to severe disease but they could be used together. For example, gel can maintain the eyelid margin and be applied before bed to reduce eye mucus discharge in the morning, supported by drops throughout the day.

He said the products were included on Australia’s Register of Therapeutic Goods three years ago, and were also being sold in some Middle East countries and the United Kingdom. He hoped they would soon go on the market in the USA and mainland Europe.

‘Response from optometrists in Australia has been quite outstanding and from patients, overwhelming. The drops do sting and it doesn’t work for everyone but where it does work, it can be profound,’ he said.

‘They are different products from what they have been used to for dry eye, and are among the leading products sold for chronic dry eye. We’ve done a lot of post-market monitoring with feedback from clinicians and consumers.’

Mr Moloney said the honey products should be used as adjunctive therapy for dry eye and were an effective management tool to manage MGD and blepharitis. He said good eyelid hygiene, clean eyes and eyelid margins, should always be initial therapy but if lubricants did not manage the condition well, people could try the honey products.

‘For most people with chronic dry eye which is difficult to manage, they will be suitable,’ he said.

‘Honey has been used in eye care for thousands of years but it has now been developed to a sterilised, standardised, pharmaceutical grade form and we understand how it works and people who it might be suitable for.

‘This new study is part of ongoing post-market clinical follow-up to ensure it works as expected and to further support indications.’

Optimel honey gel and drops are sold by optometrists in every state and territory of Australia, and Melcare encourages people to see their optometrist first for a dry eye diagnosis and advice about which product to use. Optometrists can source the products from Designs For Vision.

Optimel Dry Eye Drops are also sold over the counter at pharmacies.

The same authors reported in the journal on another trial which found that serial intense pulsed light therapy combined with meibomian gland expression significantly improved dry eye symptoms and clinical signs, including meibomian gland secretion quality and expressibility and ocular surface inflammation in moderate to advanced MGD. Treatment effects were cumulative and sustained for at least six weeks after the final treatment.