A new surgical procedure for pterygium uses amniotic tissue and results in a lower recurrence rate than existing surgery.

Dr Kerrie Meades is an ophthalmologist, cataract and refractive surgeon and chief medical director of personalEYES vision clinics. She performed the Australia-first procedure on the CEO of personalEYES, Dean Powrie, on 6 July in Sydney.

AmnioTek was first used in 1940 to reconstruct the eye’s surface when damaged by chemical burns. Surgeons overseas have been using the treatment for the past five years to successfully reconstruct areas of the eye affected by pterygium.

‘After routine pterygia surgery, recurrence rates are about 15 per cent, depending on continuing UV exposure but AmnioTek reduces the rate of pterygium returning to about six per cent,’ she told Australian Optometry.

‘This treatment is safer as we don’t harvest one’s own healthy tissue.’

Dr Meades said that during surgery, the pterygium was removed with fine surgical excision and amniotic tissue taken from a placenta was applied to the raw area. ‘It is essentially a tissue graft and leads to stem cells restoring the normal anatomy,’ she said.

‘We know that using human tissue as graft promotes tissue healing and reduces inflammation. ‘Currently, ophthalmologists use conjunctival autografts to cover up the excised pterygium and reduce chances of recurrence.

‘We remove the pterygium then place the amnion which will deliver cytokines and growth factors to surrounding traumatised tissues and promote tissue healing, and reduce inflammation, scarring and neovascularisation.

‘The amniotic membrane dissolves by itself within about five days and we then leave a bandage to allow the corneal epithelium to heal nicely underneath.

‘The procedure and post-operative care are significantly more comfortable. It is performed under local anaesthesia, takes about 40 minutes, stitches are rarely required and the post-operative pain is greatly reduced since we don’t cut a piece of healthy conjunctiva tissue to cover up the surgery area,’ she said.

‘Leaving the conjunctiva intact is important as some patients might need glaucoma surgery later, which might be compromised if their conjunctiva has been harvested for a pterygium surgery before.

‘There are no side-effects but there is no guarantee of zero per cent recurrence as there might be underlying factors inducing the growth of the pterygium.’

Dr Meades said existing treatment was problematic, with a raw area of the eye exposed on removal of the pterygium. This was often painful, could become inflamed and could stimulate pterygium recurrence.

‘Fresh amniotic membrane has been used since the 1940s to treat ocular surface diseases and its safety and efficacy have been described in many scientific publications,’ she said.

‘Because it is not easy to harvest at birth, prepare and sterilise, availability has always been a major issue, limiting its usage to few specialised eye hospitals. Once prepared, the membrane needs to be kept frozen at very low temperature in order to keep all cytokines active.’

Dr Meades explained that in 1992 the first cryo-preserved amniotic membrane became commercially available in the USA but it could not be kept in a clinic for long and had to be ordered on a case by case scenario.

PersonalEYES is the first Australian company or Australia-based company to have bought AmnioTek from the manufacturer, ISP Surgical, and there have been no other official sales outside America. The distributor Swiss Med said the procedure had not been performed previously in Australia. 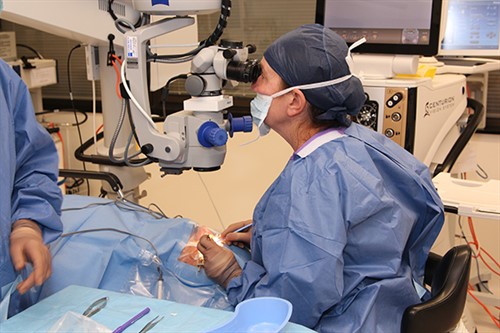 Pterygium is estimated to affect one in 100 Australians and is often called ‘surfer’s eye’ as it is believed to result from prolonged exposure to bright sunlight from UV rays and dry, windy environments.

These environmental factors are thought to cause a change in the conjunctiva which grows and invades the cornea, forming a pterygium. The growth usually presents in those over 20 years.

Symptoms include itchiness, blurred vision, redness, a burning sensation and interference with vision although it is usually painless and in many cases, asymptomatic.

‘In Australia, almost every person has some UV damage to their skin and eyes, and many choose to live with a pterygium due to the pain associated with removal. This treatment adds to our knowledge of healing and is an exciting step forward for us,’ Dr Meades said. 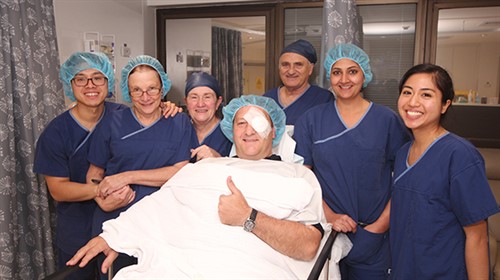