The CEO of Optometry NSW/ACT Andrew McKinnon has been made an honorary life member of the organisation, and optometrist John Davis has received a meritorious service award for their combined service of more than 60 years.

Mr McKinnon has been CEO of the NSW organisation for 22 years, and Mr Davis served on its council for 40 years.

Immediate past president of Optometry NSW/ACT Christine Craigie presented the life membership to Mr McKinnon, and new president Luke Cahill presented the service award to Mr Davis at a Christmas event at Darling Harbour on 25 November.

Mr McKinnon’s honorary life membership was in recognition and appreciation for more than 20 years’ service to the profession of optometry and the organisation.

The award states: ‘The Council bestows this honour for the dedication Andrew has shown to both serving our member optometrists and the profession’s advancement.’

Ms Craigie said Mr McKinnon had come from the Australian Physiotherapy Association and had worked for Optometry Australia for 22 years, ‘an amazing accomplishment.’

‘After working with Andrew firstly as the state media officer in the early 1990’s and then later, as a councillor, having re-joined the council team, I have  always been impressed by how unflappable this man is,  despite whatever frenzy was going on around him,’ Ms Craigie said.

‘His skills include being an excellent communicator, understanding and educating our members on business principles, HR knowledge and assistance, consumer laws, good governance principles, and being an agony uncle as needed!

‘Thank you Andrew for showing your resilience every day at the coal-face of association business and for genuinely liking members and helping them sort out their professional issues. Members appreciate your advocacy, knowledge and assistance.’

Mr McKinnon said he could not have achieved things on his own and the greatest asset he had during his service was the members.

‘There is no-one I can’t ring and ask for advice or assistance who won’t readily spend whatever time is needed to set me straight,’ he said.

‘I have consumed a lot of the time of people like Steve Zantos, Phil Anderton and Liz Jackson on questions of a variety that we probably wish we hadn’t seen but variety is what makes the days fly.

‘I’ve had people like John Davis and Joe Chakman to advise me to “just put that thought back in the draw for a while.”

‘Our legal adviser David Kennedy has talked me down off the “I want to strangle someone” ledge more times than his youthful appearance would admit, and Charles Behrens – the most entertaining accountant in captivity – and I spent weeks on the road when the GST started helping members to get their head around the new tax.’ 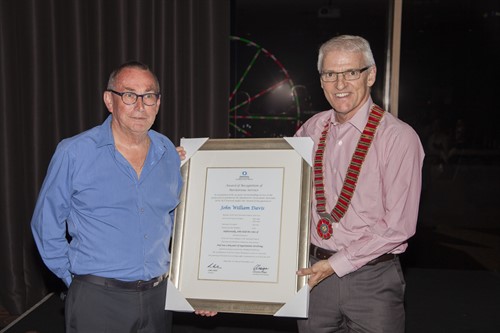 Optometry NSW/ACT president Luke Cahill said the meritorious service award for John Davis was in recognition of and deep gratitude for a life-long commitment to optometry.

‘There is an almost endless list of things that John has achieved for and on behalf of this profession,’ he said.

Mr Cahill said Mr Davis had been party to some of the great moments in the history of the optometric profession in Australia including its inclusion in Medicare in 1975 and the successful thwarting of the Keating Government’s attempt to remove optometry from Medicare in 1993, an effort led by another Life Member and former national association CEO, Joe Chakman.

Mr Davis finished his optometry course at the University of NSW in 1967 and this year celebrates 50 years’ practising optometry. He sold his practice in 2006 but still works there one day a week and one Saturday per month as well as practising at Tharawal Aboriginal Corporation in Campbelltown on Tuesdays.

He joined Optometry NSW/ACT’s council in 1977 inspired by his optometry colleague Paul Bell’s father George Bell, a past national and state president.

‘I went to his house many times over the years and he was always in my ear about participating in the profession so he, along with Brian Layland who gave me my first job in optometry, sowed the seed and inspired me to join council,’ Mr Davis said.

‘There were a number of milestones I enjoyed being part of but probably the major achievement during my time on council was the granting of the right for optometrists in NSW and the ACT to prescribe ocular therapeutics.

‘In the early 1980s council started thinking about the move towards therapeutics and we eventually imported a modified Pennsylvania College of Optometry therapeutics course into the University of NSW.

‘National registration was mooted in early 2005-2006 and we were very supportive of that and again, it was a big team effort.’

Mr Cahill paid tribute to Mr Davis’s wife, Pat, for her tireless support which had enabled her husband to spend as much time as he did working on behalf of optometry.

Christine Craigie also paid tribute to Mr Davis. She served with him on the NSW Board of Registration and the Council of Optometry NSW/ACT over many years.

‘I was the chair of the NSW Board of Registration at the time. John always focussed on the big picture implications of the projects at hand,’ she said.

‘Within the registration board John volunteered to mentor young optometrists who were finding themselves in trouble with the registration authorities for the first time, and the outcome of this mentoring was very favourable.

‘John has never served on a board to be self-serving and always focuses on how to improve the organisations he participates in.

‘His political affiliations have often opened doors for our association when we needed to contribute something to the debate on public eye-care.

‘We have established our profession in NSW as part of the health delivery pathway, due to people like John Davis and Phil Anderton.

‘I am thankful that I was there for the meetings with the Director General of Health, the NSW  Chief Medical Officer, and a number of health ministers along the way, so that I could live those exciting times when we achieved getting ocular therapeutics through Parliament and oversaw the amalgamation of  the State Registration Boards into one AHPRA organisation.

‘Those times can never be repeated. But now we have new horizons in our gaze and thanks to people like John we know how to approach achieving them.’