Author Joanne Anderton and her father, optometrist Dr Phil Anderton, with her book and his home-made ‘Little Red Rocket’ plane.

Flying optometrist Dr Phil Anderton has had his story brought to life in a children’s book written by his daughter Joanne.

Joanne Anderton has departed from her usual genre as the author of science fiction books to write her first children’s book, The Flying Optometrist, due to launch on 1 April. 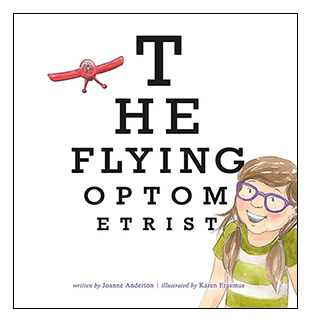 ‘I really liked hearing Dad’s stories when he came back from these outback visits,’ Joanne told Optometry Australia. ‘It was such a great little adventure and for kids it had all the ingredients of a great story.

‘Also as a child I wore glasses and I remember going to the optometrist. I was one of the first to get glasses at school and it was hard being a bit different so I wanted to help kids understand how it is normal and wonderful, and an adventure to wear glasses.

‘When Dad “retired” with mum to a property near Tamworth there was a big shed and he built a plane as a form of relaxation. Our family has always had a relationship with flying – my grandfather flew planes and my brother is in the air force,’ Joanne said.

‘When I told Dad I wanted to write a book about him he laughed as he is quite modest and he couldn’t see that anyone would be interested in his story but I said it’s an important story about the differences between health access in the city and the country, and it’s a fun story about your plane and the outback and adventures.’

Apart from being Phil’s story, the book also pays tribute to the hard work of all visiting optometrists by referencing the Visiting Optometrists Scheme, explaining how it provides optometry services to nearly 200 regional, rural and remote  locations.

Dr Anderton did his first visiting optometry flight in 2011. Twice a year he flies from his home on the NSW coast to remote outback centres, such as Wanaaring and Tibooburra, to provide eye checks to those in need. He flies three hours instead of driving 18 hours to visit the towns.

The visits are aligned with the Brien Holden Vision Institute and funded under the federal government’s Visiting Optometrists Scheme. While Joanne says he is one of many optometrists in the scheme, he is the only one who flies a plane built by himself.

Three years ago Joanne accompanied her father in the plane, dubbed the ‘Little Red Rocket,’ during a visit to Wanaaring so she could see and incorporate into the book what happens, such as the plane circling the pub a few times to let everyone know he has arrived due to mobile phone reception not being ideal. 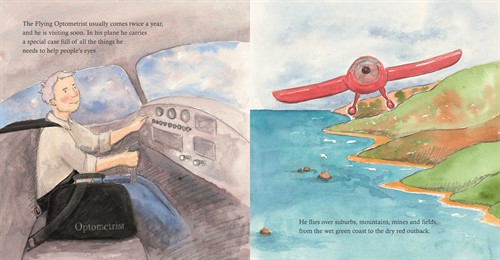 Excerpt from The Flying Optometrist

Stephanie is the main character, a girl who needs new glasses because of a cracked lens and snapped arm.

Phil is not the only real life character with several others loosely based on Wanaaring residents including Narelle who owns the pub, stockman Reg who cannot see well up close, Bill the plumber who needs regular eye checks after getting a piece of metal in his eye and Aboriginal elder Auntie Pat whose vision is becoming blurry from diabetes, preventing her from painting emu eggs.

The library likes actual information and photos at the end of fictional stories so Joanne has included information on the real work done by her father, the Visiting Optometrists Scheme, the Brien Holden Vision Institute and its Aboriginal Eye Care Program, and The Royal Flying Doctor Service, along with photos. 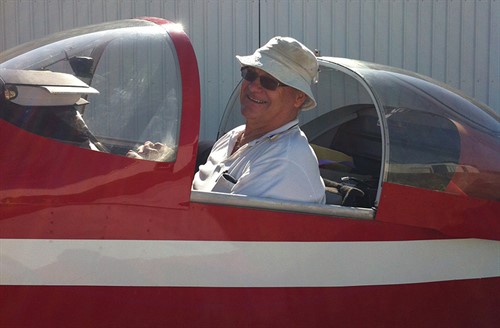 Dr Phil Anderton in his plane, as seen in the book

‘This way the book is educational too,’ Phil said. ‘I’m delighted with it. After flying there twice a year for the past few years I’ve got to know the locals. They look after me and give me a meal in the pub and a few beers.

‘I see the same people but there are a few different ones as a visiting stockman or plumber might be in town when I’m there. I see young kids heading off to school, older people with diabetes, the whole gamut.

‘They generally receive their glasses in the mail two weeks later. It’s good fun and I like it.’

The Andertons paid tribute to illustrator Karen Erasmus whose illustrations from photos Phil took got the colours of the outback ‘just right’.

‘The streets look just like they do in the photos,’ Phil said. ‘I’m really pleased – it illustrates what happens in rural health nicely and how different it is from the city. In Wanaaring there is only one health professional, a nurse, who is literally on duty 24 hours a day.’

His next flight to Wanaaring in April coincides with the book’s launch, and he will take several copies.

Joanne hopes optometry practices and school libraries will buy the book and she plans to visit schools to give talks.

The Flying Optometrist can be purchased from book stores, online at Booktopia and the National Library of Australia for $24.95.