Vitamin C protects against nuclear cataract progression but manganese and micronutrient supplements do not, a study reported in Ophthalmology has found.

According to the authors, this study is the first to show that dietary vitamin C intake protects against progression of nuclear leans opacity.

The authors also concluded that genetic factors explained 35 per cent of the variation in nuclear cataract progression over 10 years, and that environmental factors accounted for the remaining variance.

The study on genetic and dietary factors influencing the progression of nuclear cataract was conducted with 2,054 female twins.

The Department of Optometry and Vision Sciences at the University of Melbourne is running a series of free lectures, the first of which is entitled ‘Focusing on glaucoma’.

The first lecture in the series will be held on 20 April, from 6:30 pm to 8:30 pm at the School of Population Health, Theatre 2, 207 Bouverie Street, University of Melbourne, Carlton.

Professor Wolffsohn is Deputy Dean of Life and Health Sciences and a Professor of Optometry at Aston University in Birmingham, UK.

As part of his award, Professor Wolffsohn will receive up to US$3,000 towards the cost of attending a major international conference during 2016.

Professor Wolffsohn is on the editorial board of Clinical and Experimental Optometry, the peer-reviewed journal of Optometry Australia.

From 1 July this year, the Australian Government is introducing changes to the National Diabetes Services Scheme (NDSS).

Under the new arrangements, people with diabetes will collect their government-subsidised diabetes-related products at a pharmacy and no longer via Diabetes Australia. The products include needles, syringes, blood glucose test strips and urine test strips, and insulin pump consumables.

The NDSS is an Australian Government-funded scheme that provides subsidised products for people with diabetes, along with self-management information and support services.

Further information is available on the Department of Health website.

CooperVision has updated its OptiExpert App to include multifocal and toric calculators to assist optometrists in fitting contact lenses to a wider range of patients.

OptiExpert App is available in 14 languages and can be downloaded for Apple and Android devices. It provides lens suggestions from CooperVision’s range of products including Avaira, Biofinity, Biomedics, Clariti and Proclear.

The patient’s most recent spectacle prescription is entered into the calculator. The app then makes an initial diagnostic lens suggestion from the company’s range.

The app also converts Efron’s Grading Scales into a tool to grade patients against 16 sets of images and covers the key anterior ocular complications of contact lens wear. CooperVision says the app can securely store images of the patient’s eye to allow comparison to other images on the scale and to facilitate accurate grading.

Practitioners can add comments to each patient evaluation to compile a record of the patient’s condition and treatment.

The app is free but practitioners need to speak to their CooperVision business development manager to obtain a password before visiting the relevant app store. 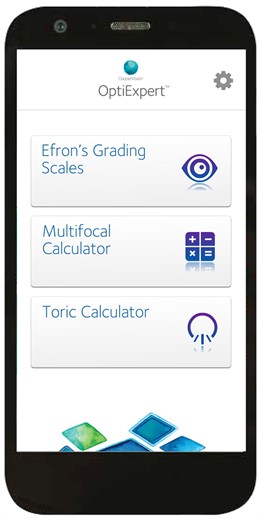