Children and adults taking part in a mock Olympic Games at the OPSM Eye Hub Hawthorn over the weekend also learned about UV protection for eyes and orthokeratology.

The event, on 5 and 6 August, was organised by Eye Hub optometrist and Olympian, Dr Phoebe Stanley, who represented Australia in rowing at the London 2012 Olympic Games.

‘The Olympic event was a huge success with increased foot traffic and everyone getting in the spirit of the Rio Olympics,’ Dr Stanley said.

‘The store was decorated in green and gold and we even had our own “lighting of the cauldron” ceremony. The cauldron will burn for the duration of the Olympic Games.

‘The staff were encouraged to wear a little bit of green and gold and all really got behind it, creating a great vibe and energy in the store.

‘Customers browsing or waiting for their appointments loved the chance to get an inside look at the life of an Olympian.’

Events included the Eye Hub Pentathlon, an amazing race around the store, which included naming 10 international flags from countries represented at the Olympics; a rowing machine challenge; a running challenge; an opportunity to sign your name on the community wall; a dress-up-as-your-favourite-Olympian; and medal ceremonies.

About 60 children took part in the pentathlon and received prizes and lollies.

The adult rowing machine challenge was sponsored by 776BC, an elite athlete clothing label designed by Olympic rower Cameron McKenzie-McHarg.

Dr Stanley spoke about her journey to the London Olympics, accompanied by videos of her racing overseas and attending training camps in Italy. Photos from the opening and closing ceremonies and the Olympic village were also on display.

Looking to the future, Dr Stanley also ran a Q and A panel with Tokyo Olympic hopefuls, under-23 Australian rowers Hedda Cooper, Liam Donald and India McKenzie (pictured below), who are about to head overseas to compete at the world championships in the Netherlands. 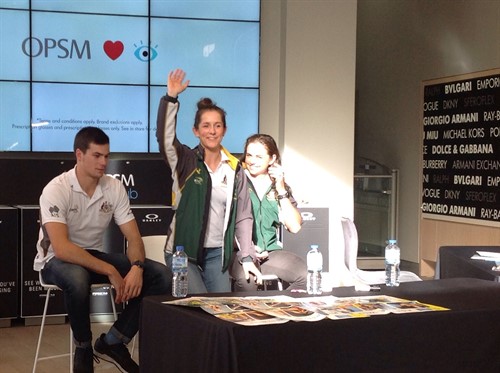