Optometrists may soon have a Medicare item number for removal of corneal foreign bodies after four years of lobbying by Optometry Australia.

The Medicare Services Advisory Committee (MSAC) has recommended an item number for removal of imbedded corneal foreign bodies (CFB) for any person presenting to an optometrist. The item will be established if the government supports the recommendation.

Optometry Australia national policy manager Skye Cappuccio said Optometry Australia had been advised by the Health Department that MSAC supported public funding for the item, and it now rested with the government to consider the advice of MSAC.

The committee recommended the item be listed at $72.15 (100 per cent scheduled fee).

The recommendation was made at the committee’s November 2014 meeting.

In its submission to MSAC, Optometry Australia estimated that optometrists performed about 35,000 CFB removal procedures in Australia every year.

An application requesting the listing was initially submitted to the Department of Health and Ageing by Optometrists Association Australia in February 2011.

An imbedded corneal foreign body is described as one that is lodged in the sub-epithelial or intra-epithelial corneal layers.

The application relates to a new item by which optometrists may bill for the service described.

The recommended new item is for removal of imbedded corneal foreign bodies not more than once on the same day by the same practitioner, excluding after-care.

It states that when charging the new item, the optometrist should document the nature of the imbedded foreign body, sub-epithelial or intra-epithelial, and whether removal was undertaken using a hypodermic needle, foreign body gouge or similar surgical instrument with magnification provided by a slitlamp biomicroscope, loupe or similar device.

The optometrist should document whether rust rings were removed from the cornea using a dental burr, foreign body gauge or similar instrument with magnification by a slitlamp biomicroscope.

Under current arrangements, ophthalmologists and general practitioners can bill for removal of an imbedded foreign body from the cornea or sclera under MBS item number 42644. The current scheduled fee for item 42644 is $72.15. Medicare statistics show item 42644 was claimed 26,457 times in 2010-2011.

Patients can also access the service at hospital emergency departments and 84 such procedures were performed in emergency in 2009-2010, according to the National Hospital Morbidity Database. 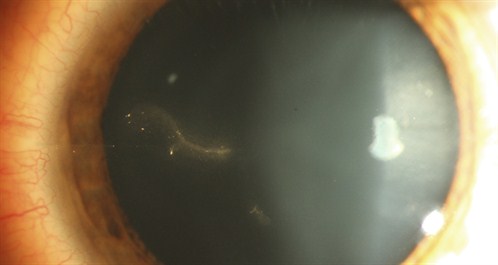