A review of myopia studies has confirmed that population-based data shows a consistent protective association between time outdoors and myopia. It follows a prediction that half the world will be myopic by 2050.

Reviewers said evidence for the association of near work with myopia was not as robust as the association with time outdoors and may be difficult to quantify. They said experimental models and epidemiological associations suggested a role for neural nicotine acetylcholine receptors on ocular growth but more studies were warranted.

Brien Holden Vision Institute CEO Professor Kovin Naidoo reiterated that children should be outdoors for at least two hours a day and should avoid too much time on electronic devices.

BHVI researchers warned in a media release on World Sight Day that as many as one billion people could be at risk of blindness by the middle of the century if the emerging myopia epidemic is ignored.

They predict that nearly five billion people will be myopic by 2050, with up to one billion having high myopia and at significantly increased risk of blindness, if behavioural interventions and optical treatments are not developed and implemented.

Professor Naidoo said that reducing the progression of myopia in individuals by 50 per cent would prevent almost 90 per cent of myopes reaching high myopia.

Last year a University of Ulster study revealed that nearly one-quarter of British children aged 12 and 13 years had been diagnosed with myopia. This compared with a reported incidence of myopia of 10 per cent in the 1960s.

Another published study by a Melbourne ophthalmologist found that an extra 40 minutes of outside activity per day over three years led to a 23 per cent reduction in the rate of myopia in six-year-old Chinese children.

The study, by Professor of Ophthalmic Epidemiology at the University of Melbourne, Professor Mingguang He from the Centre for Eye Research Australia, was published in the Journal of the American Medical Association.

It monitored 1,903 grade one children whose average age was 6.6 years, from 12 schools in China.

The other 951 children continued their usual pattern of activity.

Annual cycloplegic refraction tests and eye examinations found that after three years, the extra time outdoors resulted in a significant reduction in the incident rate of myopia, compared with children who did not participate in additional outdoor play time.

‘This reduction is clinically important because we targeted young children around six years of age, and these children are at greater risk of progressing to severe myopia if they develop myopia early,’ Professor He said in a media release.

‘If we can delay the onset of myopia through a simple and cost-effective intervention like this, we can provide great long-term eye health benefits.’

The researchers said myopia had reached epidemic levels in parts of East and Southeast Asia. Young adults here were being increasingly affected, with 80 to 90 per cent of high school graduates diagnosed and 20 per cent of these having high myopia (equal to or less than -6 dioptres.)

While the exact link between time spent outdoors and better eyesight remains unclear, Professor He and his colleagues propose that this might involve increased dopamine release from the retina, stimulated by brighter light outdoor.

‘School-based initiatives could include even more time for classes outdoors, for example using school recesses to get children outdoors, encouraging parents to bring their children outdoors at weekends, or using new classroom design to provide higher indoor light intensities,’ he said.

‘All of these strategies will help translate the research findings into community benefit.’

Professor He conducted the study when he was associate director and Professor of Ophthalmology in Zhongshan Ophthalmic Centre, Sun Yat-sen University, Guangzhou. 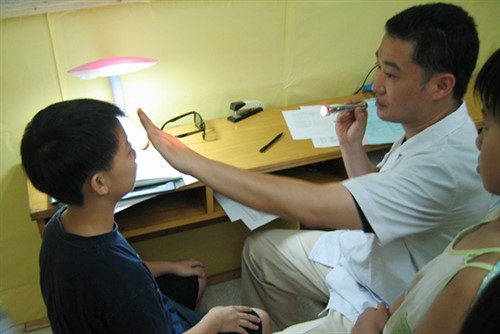 Another new study, in identical twins, also confirmed known environmental risk factors for myopia. It found that twins who spent more time outdoors or performed more outdoor sports were less likely to be myopic than their twin who performed more close work.

The British study was in 64 mainly female monozygotic twin pairs discordant for refractive error, with an average age of 57 years. The more myopic twin was associated with having a higher occupational status, living in an urban area and performing more close work when younger than age 16 years and between 16 and 25 years, than their twin. Close work was defined as reading, studying, sewing, knitting and other close work.

Twins who spent more time outdoors or performed more outdoor sports in both age groups were less likely to be myopic than their twin.

‘Our study suggests differences in lifestyles before 25 years of age have a sustained effect, reflected in twin subjects’ refraction over 30 years later,’ the researchers said.

The strength of associations in close work, time outside and outdoor sport were stronger between ages 16 and 25 than before 16. The researchers said that while much of myopia was assumed to be school onset, 42 per cent of myopes in their cohort first wore spectacles after age 16.