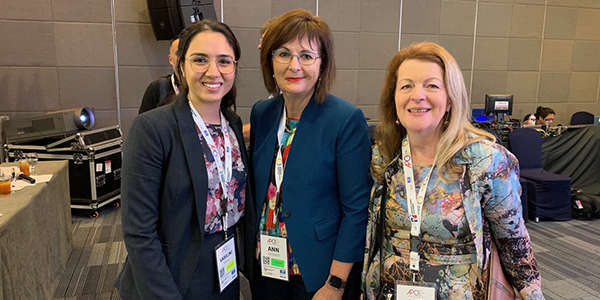 Optometry Australia CEO Lyn Brodie presented findings from the Optometry 2040 initiative at APOC 2019 last week. The congress, which concluded last Thursday after a full program of activities in the Philippines’ capital Manila, attracted delegates from around the world, including a contingent from Australia. Lyn brings her thoughts together below.

The 22nd Asian Pacific Optometry Congress (APOC) concluded on 20 June with as much fanfare as the opening four days prior. Our own Associate Professor Peter Hendicott had the role of welcoming and farewelling the estimated 500 delegates from almost 30 countries, in his position as President of the Asian Pacific Council of Optometry (APCO.)

I also had the privilege of presenting the findings of the Optometry 2040  initiative at the final session. The feedback was excellent and many delegates were very interested to explore the findings further. We were congratulated on our forward thinking and innovation.

My presentation was part of a panel discussion on “What’s the future of optometry in Asia?” World Council of Optometry President Dr Scott Mundle presented, along with Dr Peter Hendicott, and provided key strategic initiatives being pursued by the WCO.

It was interesting to reflect on the impact of the Optometry 2040 findings on Asia. Country boundaries for practice may very well blur with the greater use of technology and tele-health. It presents an opportunity to collaborate and raise the standards and standing of optometry around the region.

Recognition of optometry within the health sector varies considerably from country to country, and more advanced countries have a role to play in mentoring optometrists to ensure they are able to participate fully in enhancing the health and wellbeing of communities.

As of 1 July, we will be hosting the secretariat for APCO and look forward to building strong networks in the region to support optometry in Australia and beyond.