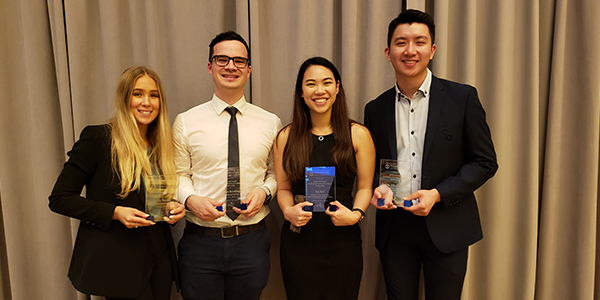 The American Academy of Optometry Foundation has extended its practice excellence scholarships to Australia for the first time, awarding them to four top-performing optometry students.

In December, the foundation, which is the philanthropic arm of the American Academy of Optometry, announced the 2019 VSP Global scholarship recipients for the inaugural Australian Practice Excellence Scholarships. They are:

Students were nominated by their individual institutions and selected based on key criteria including their commitment to enter the independent practice of optometry, and their clinical and academic performance.

Nearly $200,000 was awarded to top-performing fourth-year optometry students in the United States, Puerto Rico and Canada and this year, in honour of the 3rd World Congress of Optometry, held in conjunction with the Academy meeting in Orlando, Florida, VSP Global added the Australian scholarships.

‘The Practice Excellence Scholarship is another example of our commitment to optometry’s next generation, and we are honoured to extend this recognition to optometry students in Australia, a country in which we have a strong optometrist network,’ said optometrist and VSP Global Board Chairman, Gordon Jennings.

Since 2010, VSP Global has provided more than $2.4 million in scholarship support to hundreds of optometry students.

The scholarships are funded through its Global Charitable Fund, and administered through the foundation.

‘We are very grateful for the continued partnership we have with VSP,’ said American Academy of Optometry Foundation president Pete Kollbaum.

‘Through VSP’s continued support of this partnership it is demonstrating its commitment to advance optometry, the Academy, and, most importantly, the clinical care patients are able to receive. We are very grateful for its foresight in supporting these very deserving future leaders and their dedication to support the future of optometry.’

Each scholarship included a travel grant to participate in the American Academy of Optometry’s 98th annual meeting, Academy 2019 Orlando, on October 23-27. Recipients were recognised at a reception sponsored by VSP Global.

The 2019 scholarship recipients including the Australians, pictured at left

The American Academy of Optometry Foundation promotes and aids optometric education, optometry and its practitioners.