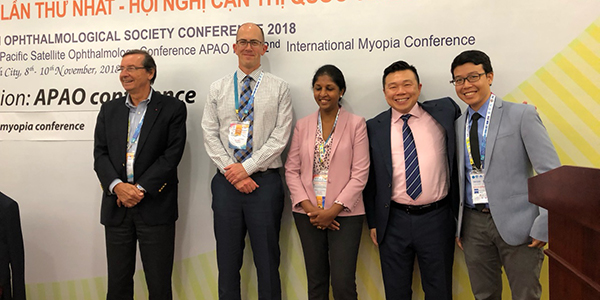 Australian optometrists, Dr Timothy Fricke, second from left, and Head of Myopia at the Brien Holden Vision Institute Professor Padmaja Sankaridurg at the Vietnam Ophthalmological Society Congress 2018. One of Vietnam’s first optometrists is at far right, and, at far left is ophthalmologist Dr Serge Resnikoff, former director of the WHO’s Prevention of Blindness and Deafness Program who is in Vietnam to help advocate to the Vietnamese government in support of optometry development. Image, Brien Holden Vision Institute.

Tim, a sessional optometrist at the Australian College of Optometry, has helped to teach and mentor educators in Vietnam since 2008. The fellowship is enabling him to spend a month there until 1 December supporting delivery of evidence-based binocular vision education in optometry.

The fellowship will enable Tim to collaborate with local optometry lecturers to deliver lectures, demonstrate practical work and supervise examinations for optometry students in Hanoi and deliver professional development for optometry practitioners, educators, ophthalmologists and ophthalmic nurses in Hanoi.

He will also advise on improvements to Vietnam’s optometry curriculum and participate in advocacy meetings with stakeholders to promote optometry education, integration of optometry into the health system and opportunities for optometry graduates.

Tim presented at the Vietnam Ophthalmological Society (VOS) Congress 2018 from November 8 to 10 in Ho Chi Minh City and mentored optometry lecturers in Hanoi and Ho Chi Minh City during the congress.

Tim’s fellowship coincided with the graduation last week of the nation’s first Vietnamese optometrists. Melbourne optometrist Dr Suit May Ho, who has been integral in setting up Vietnam’s first two optometry schools, attended the graduation ceremony.

May, who is the Global Education Program Manager with the Brien Holden Vision Institute, established the institute’s program in Vietnam ten years ago.

Brien Holden Vision Institute was invited to host the 2nd International Myopia Conference at the VOS congress and May also presented and chaired myopia sessions and panels at the congress. 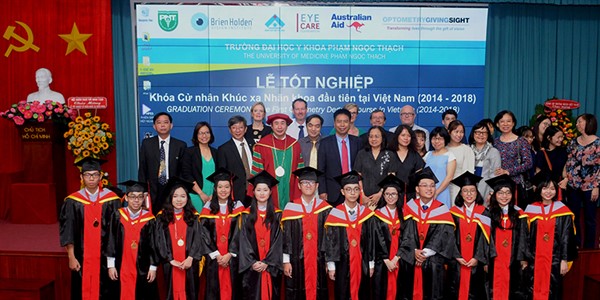 The first optometrist graduates emerged as the pioneer generation when they graduated from the Pham Ngoc Thach University of Medicine in Ho Chi Minh City on 8 November, 2018.

With an existing 12 overseas-trained optometrists currently practising in Vietnam, there will now be 24 optometrists to serve a population of 93 million people.

Following this May, and the Brien Holden Vision Institute team, began advocating for the introduction of optometry in Vietnam, and seven years later in 2014, she was part of the opening of its first optometry course, in Ho Chi Minh City.

There are more than 300 optometry students enrolled in the two pioneering optometry schools. The second school at the Hanoi Medical University will graduate its first optometrists in 2019.

May said: ‘When we first started working in Hanoi, the ophthalmologists hadn’t been exposed to optometry before, but I was confident and determined they would see the value of our work for the community, which of course they did.

‘What drives me is the level of commitment that I see in the young optometrists. I am in awe of their tenacity and strength in forging the course of a new profession.’

May was recently named an Eye Health Hero by the International Agency for the Prevention of Blindness for her work training eye health workers in Vietnam, Cambodia and Timor-Leste.