Diplomate, American Board
of Optometry

A 58-year-old Caucasian male presented complaining of progressively decreased, dim, tunnel-like vision and colour abnormalities in the right eye. He had noticed the symptoms worsening over the previous six months. Past ocular history revealed that a year prior to the visit, he had had his first eye examination and was diagnosed with glaucoma in both eyes. He reported the intraocular pressure (IOP) at the time of diagnosis was 25 mmHg in the right eye. He had been using Travatan Z every bedtime in both eyes since the diagnosis and was started on Combigan twice a day in the right eye about a month prior to his current visit.

The patient admitted to poor compliance with topical medications. He denied any history of trauma or ophthalmic surgery. The patient’s medical history revealed a Mallory-Weiss tear that had been surgically repaired in 1985. He also reported taking steroids for bodybuilding for about a year more than 20 years ago. The patient was taking 20 mg of the oral medication Omeprazole every day for high cholesterol. Family history was positive for glaucoma of unknown type in the patient’s grandmother. It was not known whether she had gone blind. The patient denied suffering from allergies to any medications. He denied smoking, stated he occasionally drank beer, and reported consuming two cups of coffee per day. The patient’s mood and affect were normal and he was oriented to person, place and time. The patient’s blood pressure was measured at 153/90 at 2:13 pm. 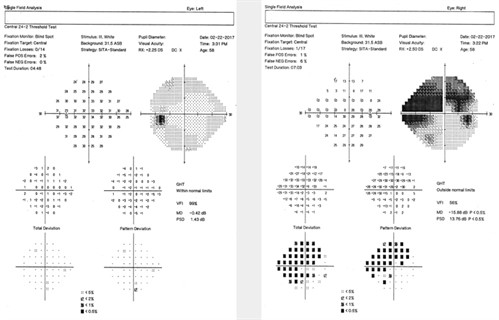 Gonioscopy revealed ciliary body band 360 degrees in both eyes with regular approach and 1+ trabecular meshwork pigmentation in both eyes. There was no peripheral anterior synechiae, no recession, no neovascularisation and no blood present in Schlemm’s canal in either eye. Dilated retinal fundus examination revealed a clear vitreous in both eyes. The optic nerve was pink and distinct in both eyes with advanced cupping and extensive peripapillary atrophy observed in the right eye (Figures 2A and 2B). 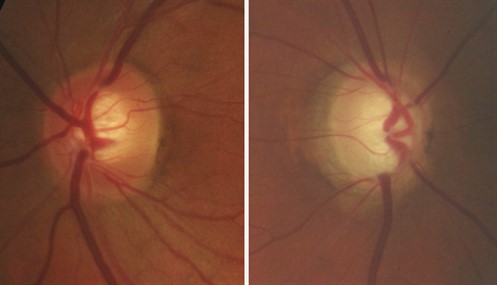 The cup-to-disc ratio was estimated to be 0.90/0.95 in the right eye and 0.50/0.55 in the left eye. Disc haemorrhages were not observed in either eye. Maculae were flat and dry with few small drusen in the foveal region of both eyes. Vessels were normal in both eyes. Retinal periphery was flat and intact 360 degrees in both eyes.

Central corneal thickness was measured at 601 µm in the right eye and 605 µm in the left. Optical coherence tomography (OCT) was reliable and revealed retinal nerve fibre layer (RNFL) thinning and retinal ganglion cell (RGC) loss in the right eye (Figures 3A and 3B). 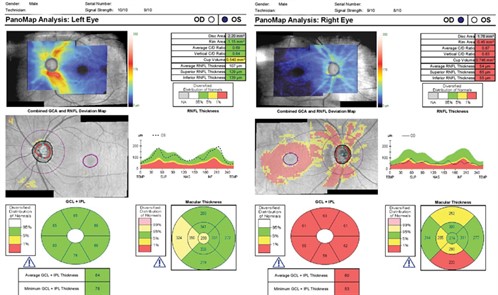 Figures 3A and 3B. OCT demonstrating RNFL and GCL loss in the right eye

Glaucoma is a heterogeneous group of diseases with multiple primary and secondary factors that lead to irreversible vision loss from the dysfunction and death of retinal ganglion cells (RGC).1 Elevated IOP is considered to be one of the initial causes of insult in glaucomatous atrophy.1 Prolonged treatment with corticosteroids is known to cause significant increase in IOP, which may lead to open angle glaucoma.2 It is believed that corticosteroid use increases outflow resistance of the aqueous by inhibiting the degradation of extracellular matrix material in the trabecular meshwork.3 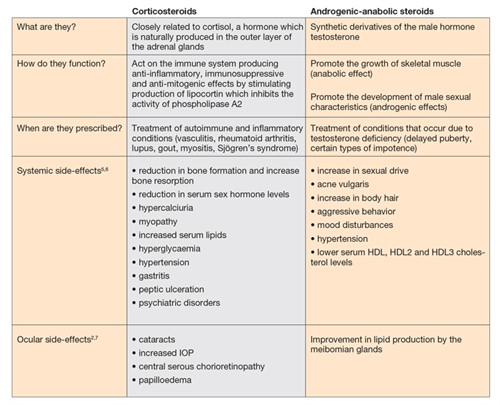 Table 1. Comparison of corticosteroids and androgenic-anabolic and their common side-effects

Early detection and treatment of glaucoma leads to slower progression;4 however, our patient’s history revealed he used steroids for bodybuilding. These substances belong to the androgenic-anabolic (AAS) derivatives group.5 It is unlikely they contributed to the development of glaucoma in the right eye. While AAS misuse has been associated with disturbance of endocrine, immune, cardiovascular, urogenital and psychiatric function,6 the literature does not reveal any reports of adverse ophthalmic side-effects. On the contrary, studies have shown that women suffering from primary and secondary Sjögren’s syndrome are androgen-deficient.7 There is evidence that the androgen deficiency may lead to meibomian gland dysfunction, altered lipid profiles in meibomian gland secretions, tear film instability, and evaporative dry eye.7,8 Androgen receptor modulators are being studied for treatment of dry eye disease.9