The University of Melbourne Optometry and Vision Sciences

Studies have confirmed a higher prevalence of POAG in people of African descent between the ages of 40–80 years old compared to any other ethnicity.4,6-8  The Baltimore Eye Survey Report found African-Americans to be at a four times higher risk of developing POAG compared to Caucasians.4

IOP remains the only modifiable risk factor in preventing or delaying glaucoma progression.9 As primary eye care providers, it is important to maintain a consistent management plan appropriate in achieving target IOP levels. With advances in technology, research, surgery and pharmacological agents, we are developing better means of providing care for our patients.

TM, a 48-year-old African-American male, was first referred in 2012 for a glaucoma diagnosis. He had a complex medical history of significant hearing loss and sleep dysfunction. He was currently taking Motrin and Flexeril for previous medical injuries. TM also has a family history of glaucoma.

On examination, unaided visual acuity was 6/6 in each eye. The patient had significant bilateral floppy eyelids, and pupils revealed a Marcus Gunn afferent defect in the left eye (LE). Anterior chamber angles were open (ciliary body 360 degree in each eye using gonioscopy). CCT measurements were within normal limits (RE 560µm, LE 552µm). IOP measurements at 5:00pm by Goldmann applanation tonometry were 20 mmHg in the RE and 23 mmHg in the LE. No pseudoexfoliation or cataract was observed in either eye. Dilated fundus examination (DFE) showed a healthy right optic nerve (C/D ratio 0.4) and abnormal left optic nerve with superior erosion, laminar pores and superior optic pit.

DFE findings were confirmed with optical coherence tomography (OCT) and automated perimetry using a Humphrey Field Analyzer (HFA). The right eye was normal in both tests. The left eye OCT confirmed a superior RNFL loss at the disc in the left eye and HFA found a significant inferior macular bundle defect (Figures 1 and 2). 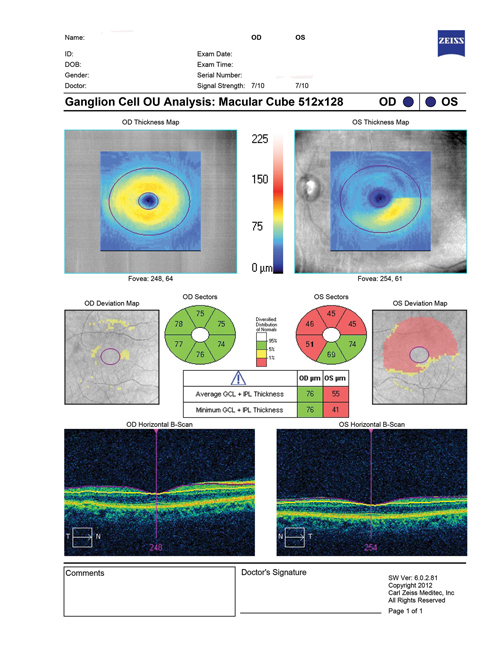 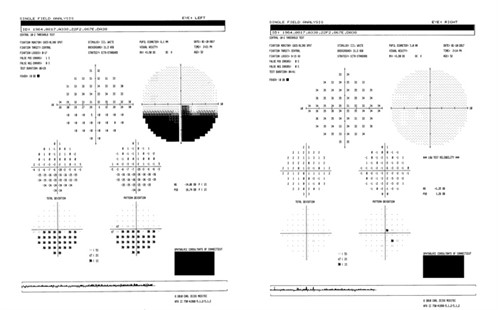 TM was placed on Alphagan P 1 drops twice a day and referred for a full blood workup to rule out the possibility of vascular insult. He was also referred to a sleep study for further investigation of suspected undiagnosed sleep apnoea.

TM was diagnosed in late 2012 with severe sleep apnoea during REM sleep with oxygen desaturation. He was recommended to commence Continuous Positive Airways Pressure (CPAP) treatment and pursue weight loss to achieve an ideal body weight. TM was on a three-month review schedule for one year at our clinic to closely monitor his IOP fluctuations and evaluate the efficacy of monotherapy drops via fundus, IOP, OCT and VF tests.

In 2013 TM’s IOP was unstable and fluctuated at each of his six-month reviews. In an effort to lower his IOP, the therapeutic drops were changed three times trialling Travatan, Asopt and Combigan, respectively. All of which proved to be insufficient in maintaining a low target IOP.

It wasn’t until 2014 that TM was prescribed Simbrinza suspension (three a day) that his IOP dropped within target range and maintained stable pressures. To this day, he maintains a healthy target IOP and is still undergoing treatment for his severe sleep apnoea.

Sleep apnoea is a common chronic disorder and requires life-long care. It has been found to be more prevalent in males than females.10 It has also been documented previously to be associated with ocular diseases such as glaucoma, non-arteritic anterior ischaemic optic neuropathy (NAAION), bilateral disc oedema, floppy eyelid syndrome, blepharitis, ptosis, papillary conjunctivitis, filamentary keratitis, retinal vascular tortuosity and central serous chorioretinopathy.11 Previous studies have shown a strong implication of sleep apnoea with NAAION, thus it is important to consider and rule out suspicions of NAAION as a differential diagnosis to glaucoma.12,13

In a report, patients with sleep apnoea and currently undergoing CPAP have demonstrated an associated increase in IOP, especially at night.14 The mechanism of CPAP on raised IOP is not well understood, but theories hypothesise an elevated CPAP intrathoracic pressure may cause a rise in venous circulation pressure, thus reducing the outflow of aqueous through the episcleral veins.14 Normally, aqueous humour production at night decreases, but there is an increase in episcleral venous pressure due to lying in the supine position.15 They found a significant drop in IOP was observed when CPAP was ceased for 30 minutes. This is important as it was found that diurnal IOP variation is linked to significant visual field loss. It has been reported that there is a 30 per cent chance of visual field loss with every 1 mmHg increase over a five-year increment.16

Monotherapy is not always sufficient in managing and maintaining a target IOP and/or preventing glaucoma progression. According to the Ocular Hypertensive Treatment Study (OHTS), 40 per cent of patients require a second ocular hypotensive eye drop in order to achieve a targeted reduction of 20 per cent.17 Benefits of fixed-drop combination therapies include increased likelihood of patient compliance, reduced exposure to preservatives and less chances of sequential medication washout.11 However, until recently, beta-blockers (particularly timolol 0.5%) were the most commonly-used agent in fixed-combination eye drops. Due to local allergy or systemic side effects associated with use of beta-blockers, these drugs have been contraindicated in many patients with cardiac issues. Not recommended for first line treatment, fixed-combination eye drops are mainly used if a prostaglandin analogue (PGA) or other agent is unsuccessful in lowering IOP, and can be useful additives in achieving target IOP.

Simbrinza suspension is an effective fixed-combination eye drop that is also the only fixed-combination agent that does not contain timolol 0.5%. It comprises of brinzolamide 1% and brimonidine tartrate 0.2%. Brimonidine is a selective alpha-2-adrenergic agonist that acutely reduces aqueous production and increases uveoscleral outflow during the day. On the other hand, its nocturnal profile was not sufficient in maintaining low IOP, thus a carbonic anhydrase inhibitor (CAI) such as Brinzolamide is a great additive in controlling nocturnal IOP fluctuations.18

Studies were conducted in order to evaluate the efficacy of lowering IOP using brinzolamide/brimonidine fixed-combination (BBFC) therapy. The results found that this combination was significantly superior in its IOP-lowering activity 20–35 per cent from baseline and had a consistent safety profile compared to its individual components.19-22

In 2016, a six-week, randomised, double-masked, study investigated the additive effect of Simbrinza as an adjunct to PGA. They found at two hours post-instillation, BBFC reduced a mean IOP of 7.1 mmHg (31 per cent) from PGA baseline.23 A potential limitation to this study was that the degree of reduced IOP was evaluated based upon the eye with the highest baseline IOP. Future studies with longer duration may provide supplementary information regarding the efficacy of adjunct therapy of BBFC+PGA.

As with all therapeutic management, proper precautions and contraindications should be exercised before prescribing Simbrinza to your patient.