Mr Martella, whose last day will be on 21 March, is remaining in the health field and on 3 April will become Executive Officer for the office of the President and CEO of the Australian Medical Association (WA).

During his tenure, OWA membership rose 40 per cent from about 270 to 380, and achievements surrounding therapeutic endorsement featured heavily.

Highlights included regulation enabling therapeutic endorsement for optometrists in WA and a course enabling one quarter of OWA’s members, or 100 practitioners, to become therapeutically endorsed. Half of WA’s optometrists now have scheduled medicines endorsement. 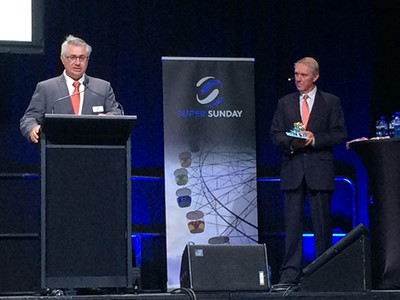 Tony came from the Master Plumbers and Gasfitters Association and Master Painters and Decorators Association to start in April 2005 as Chief Executive Officer of the WA division of the Optometrists Association Australia, now known as Optometry Western Australia.

‘It’s hard to leave. I’ve met many wonderful people in the profession and industry and have made a lot of good friends,’ he said. ‘Since announcing I was leaving, I have been inundated with good wishes from members and stakeholders in the industry.’

‘Regulation in 2010 to allow therapeutic endorsement of optometrists in WA was probably one of the major highlights,’ Mr Martella told Optometry Australia. ‘WA was the last state to achieve this and we fought hard for this.

‘Following this I liaised with the University of New South Wales to arrange for their lecturers to come to WA over four years to deliver a post-graduate therapeutics course to many of our members. I was very proud that I was able to facilitate local delivery of this course.’

‘In marketing WAVE as our main education product, I tried to build relationships with members and suppliers as their support is important and valuable for our profession,’ Mr Martella said.

‘I built WAVE to be a valuable and quality program and am thrilled with the standard of education at WAVE, the clinical workshops and the take home clinical messages optometrists are given. Also the ECO workshop for young optometrists, the day before WAVE, capitalises on the speakers at WAVE. I believe this will continue.’

WAVE was also the first optometry conference to run a dispensers program in 2010.

CPD nights state-wide were another popular initiative, with 60 to 100 people regularly attending metropolitan events with additional regional events in Albany, Bunbury, Geraldton, Mandurah and Busselton, and of course Perth. Speakers included ophthalmology experts from the Lions Eye Institute and ophthalmologists in specialty practices.

Establishing monthly eye clinics for homeless people at St Patrick’s Community Support Centre in Perth with the help of volunteer optometrists, dispensers and suppliers in the eye care industry was another important initiative. Tony arranged donated services, frames and lenses.

The organisation’s relationship with ProVision was strengthened with Tony referring many independent optometrists to ProVision.

‘I’ve travelled thousands of kilometres and it’s never been a 9 to 5 role,’ he said.

Office in a box

‘When I first started with the Association, I inherited an office with little or no member infrastructure, so I started all the systems from scratch. I had a blank canvas to work with,’ he said.

‘I leave OWA in a financially and culturally good position and in a far better state than when I started.

‘I’ve had a good relationship with the CEOs of other divisions and am proud to have contributed to the national agenda. I cannot state enough the importance of the federation.

‘I’ve been fortunate to have worked with a lot of good people and have had good support from Optometry Australia including former CEOs Joe Chakman and Genevieve Quilty and now Lyn Brodie. I’ve had a wonderful relationship with them and with OA optometrists Luke Arundel and Simon Hanna who I’ve referred many members to for help.

‘Thanks also to my invaluable assistant Jude Martindale, as I couldn’t have done it without her.’

The high regard Mr Martella is held in by members is evident from his ‘wall of spoons.’ What started as a joke asking one member going on holiday to bring him back a teaspoon, has resulted in a collection of 76 spoons, displayed lovingly in the WA office. 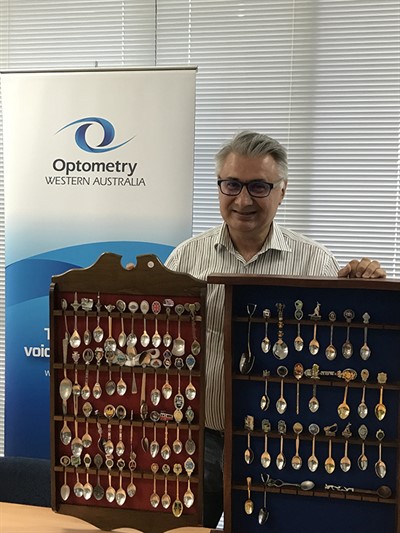 Tony Martella with his cabinet of spoons gifted from members

OWA president Dr Robert Howie said: ‘Tony was very strong on networking with members and helping them when they needed a hand. I announced his resignation at one of OWA’s Lions CPD evenings where we had a full lecture theatre with about 100 attendees.

‘There was a long queue waiting to shake Tony’s hand and wish him well afterwards. Tony was very much liked and it will be strange not to have his smiling face organising things at WAVE.

‘He leaves OWA in an enviable position as an inclusive organisation, well managed financially and with a culture of friendship, achievement and openness.’

Optometry Australia vice-president and former OWA president, now board director Darrell Baker said: ‘Tony Martella served the Western Australian state division optometric community, along with the greater national organisation and membership with the warmth and genuine support that endeared him to all.

‘He established himself as a trusted and dedicated advocate and promotor of optometry, a supporter of the underprivileged and a friend to many. We shall miss his smiling face, but he leaves behind a legacy of incredible member and peer engagement that will ensure the continued success of the organisation and profession.’

Optometrist Stephanie Bahler from Johnson and Johnson Vision was one of many OWA members who thanked Mr Martella.

‘Thank you from the bottom of my heart for being a true representation of what a CEO should be like – someone who takes the time to get to know the individuals well,’ she said.

‘You were there for me when I first moved to WA, a friendly and familiar face when I initially didn’t know many people at CPD events, you helped me through my therapeutics course, and you were there to assist in advice on several issues as well as supporting me in my decisions and career change.

‘You have also inspired me to tackle eye care for those less fortunate within Perth itself at the St Patrick’s Community Support Centre and Homeless Connect Perth.’

Optometry Australia CEO Lyn Brodie added: ‘I have very much enjoyed working with Tony – his passion, total member focus and commitment to the federation is unsurpassed. And he’s a nice person!

‘I have discussed with Rob Howie that OA will support OWA in any way it can to ensure a smooth transition and that members are well serviced.’

Dr Howie said he had accepted OA’s help during the transition and that the OWA board was advertising the position and expected to short-list by April.