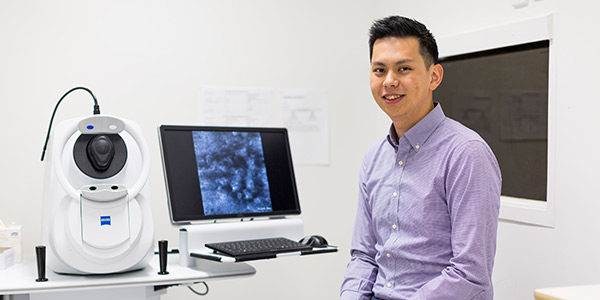 Talented early career optometrist Dr Zhichao Wu from Melbourne has been named as the Irvin M. and Beatrice Borish Award winner for 2020 by the American Academy of Optometry.

Dr Wu, a Senior Research Fellow at the Centre for Eye Research Australia, is involved in promising research on age related macular degeneration and glaucoma.

‘It’s a recognition I wasn’t quite expecting so I’m very thankful,’ he said. ‘It’s a great privilege.’

He is investigating if combined OCT and OCT Angiography (OCTA) scans can improve monitoring of AMD and detect factors that determine who is at high risk of AMD progression. Novel risk factors identified on these scans, as well as those identified by artificial intelligence (computers), are being used.

The work is a team effort and Dr Wu is grateful for the mentorship of CERA Deputy Director Professor Robyn Guymer AM who has spent 20 years tackling AMD.

Dr Wu has also worked with Professor Guymer and other collaborators to trial world first nanosecond laser technology which is showing promise in slowing some forms of AMD. The laser therapy hits cells in the eye with low-energy rays that are thought to trigger a healing response.

He is further involved with Professor Guymer and other colleagues in research to uncover why some AMD patients are at greater risk of losing sight. The international collaboration will investigate novel causes, genetic associations and potential intervention strategies using the latest technology and approaches.

Dr Wu is also undertaking research to prevent irreversible vision loss from glaucoma by exploiting new technologies to enable earlier detection and to find people on a pathway to developing the condition. He previously worked with leading glaucoma researchers at the University of California, San Diego and Columbia University, made possible by an NHMRC fellowship.

Singapore-born Dr Wu grew up in Brisbane, graduated in optometry at Queensland University of Technology in 2010 and completed a PhD in Ophthalmology at the University of Melbourne in 2014.

‘I knew that I wanted to be in some kind of health area because my mum was a nurse,’ he said. ‘She instilled in us the importance of looking after people.’

During his early years in clinical practice at the Australian College of Optometry he learned to appreciate the impact of eye diseases.

‘What really struck me was when I first saw a person who came in with bleeding in her eye because of AMD,’ he said. ‘Surely in the 21st century we should be able to do something to prevent this from happening.’

Academy Awards Committee Chair Dr John Flanagan said: ‘In our virtual world it is more important than ever to honour our exceptional colleagues and celebrate their successes. They give us hope and help shine a light on our entire profession.’

The Academy inspires excellence in optometric practice by fostering research. Due to this year’s virtual meeting, the awards will be physically presented to awardees next year at Academy 2021 in Boston.