Optometrists are playing a major part in the improvement, including through the Visiting Optometrists Scheme as the number of services provided through VOS in mainly regional and remote areas more than tripled from 8,298 occasions of service between 2010–2011 to 25,849 in 2018–2019.

The Australian Institute of Health and Welfare Indigenous eye health measures 2020 report was launched virtually today by the Minister for Health, the Hon Greg Hunt MP.

Rates of screening for diabetic retinopathy and cataract surgery also rose in this population, while trachoma rates fell more than threefold in young Indigenous children.

‘If barriers to accessing eye health services can be overcome, most of the blindness and vision impairment experienced by Indigenous Australians could be prevented or treated, particularly vision loss due to refractive error, cataract and diabetic retinopathy,’ the report states. ‘For example, use of glasses and cataract surgery are two relatively low-cost, effective interventions for treating the main causes of vision loss.’ 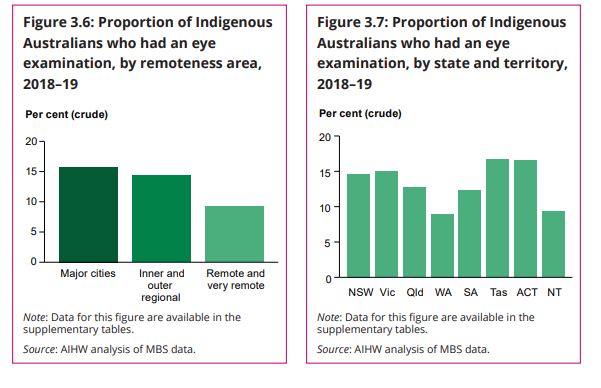 The Australian Government has committed to ending avoidable blindness in Indigenous communities by 2025 and is funding a range of initiatives to prevent and treat vision loss including a new National Agreement on Closing the Gap.

Optometry Australia’s National Policy Manager, Skye Cappuccio, an advisory group member for the report, said: ‘The report highlights some of the progress that has been made, particularly in terms of Aboriginal and Torres Strait Islander people’s access to eye care services.

‘The expansion of the Visiting Optometrists Scheme (VOS) has been one important element in this, and the optometrists involved in providing these important outreach services should be acknowledged for the important role they play. While there have been notable and welcome increases in Commonwealth funding for the VOS over the last decade, further investment still is needed to ensure access to culturally safe primary eye care.’

The report was launched on the eve of NAIDOC Week, November 8 to 15, 2020, NAIDOC (National Aborigines and Islanders Day Observance Committee) Week celebrations across Australia each year celebrate the history, culture and achievements of Aboriginal and Torres Strait Islander Peoples.

The goal of the Employment Strategy is to increase Aboriginal and Torres Strait Islander participation within Ahpra through the development of a culturally safe work environment that reflects the diversity of the communities in which we operate and serve.