A homonymous hemianopsia affects the same part of the visual field of each eye. It is often diagnosed in patients with stroke and traumatic brain injuries due to the way part of the optic nerve fibres from each eye cross over as they pass to the back of the brain (Figure 1). 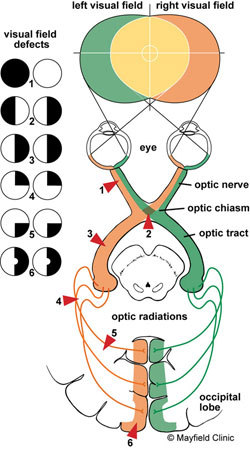 M, a 57-year-old male, presented to the clinic on 3 January 2017 complaining of gradually decreased near vision and the onset of mild headaches (top and back) for the previous two weeks. He was a new patient to the practice and because English was his second language, it was difficult to get an accurate and clear explanation of the presenting symptoms.

His wife and other family members had recently attended our clinic for routine ocular check-ups. His clinical history revealed a diagnosis of arthritis and family history of diabetes. The patient was otherwise in ‘very good’ general health.

Visual acuities were OD 6/6 OS 6/7.5++ OU 6/6 and N5 with an ADD of +1.75. He was moving his head when reading the near visual acuity chart, which prompted me to question his visual field and on further questioning he revealed a right peripheral blur. Ocular motilities and cover test findings were normal. Intraocular pressures were 15 mmHg both eyes. The anterior and posterior ocular findings were unremarkable (Figure 2). 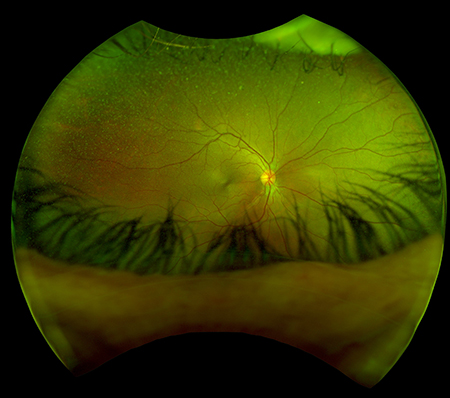 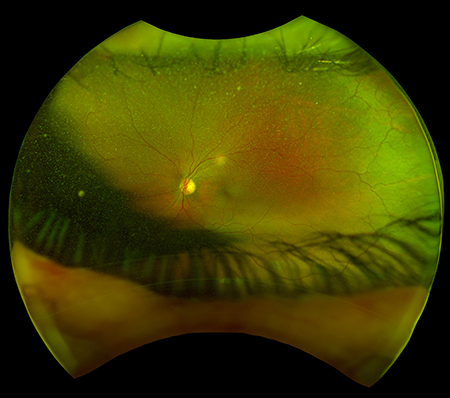 I asked my next patient to wait a little longer and conducted a neurological visual field test on M. The visual field results revealed a homonymous hemianopsia caused by a disruption of blood flow in his body (Figure 3). 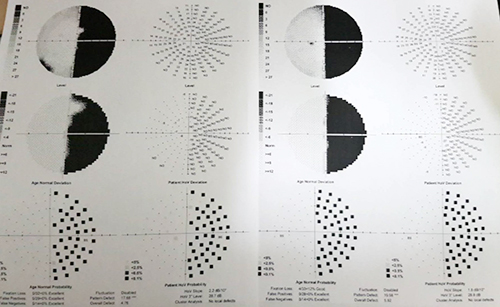 Suspecting a stroke, tumour or another serious systemic condition, I called the hospital, discussed the findings and arranged for an MRI, CT scan and blood work-up, and referred him to Emergency at Royal Hobart Hospital.

He was diagnosed with acute infective endocarditis, is being treated with antibiotics and will be under treatment at the Cardiology Ward for the next two months.

The condition could have greatly impacted his life or taken his life had he not been diagnosed at the right time and referred to the right place for the right treatment. He and his wife called us from the hospital and could not express their gratitude for the type of health-care services they were receiving.

Patients with homonymous hemianopsia often become very frustrated as they skip the end of sentences or words, they tend to lose their reading place and at times become extremely fearful of falling or running into objects. The condition also impacts a person’s ability to drive. Patients are more likely to assume that the vision loss is in one eye and not both because the damage is in the brain and not the eyes.

The most important aspect of managing a patient with homonymous hemianopsia is to refer them for the treatment of the causing condition of the hemianopsia and manage the symptoms of field loss on their discharge from the hospital. A dense hemianopsia may resolve within few months after its occurrence but most patients with hemianopsia don’t recover from it, leaving them with a permanently compromised visual field.

Treatments of homonymous hemianopsia include low vision assessment, magnifying aids and counselling. Prism lenses can be used to shift images from the non-seeing field to the seeing visual field.

Hemianopsia is commonly associate with stroke or tumour, and less commonly with aneurysm and trauma. It often decreases the patients’ ability to read, work or drive. However, various management methods are available to help patients regain independence and return to normal life.

This case is an example of the importance of critical thinking in a clinical setting and the type of health-care services we deliver where the patient’s well-being is always at the centre of everything we do. We have the knowledge, skills and nearly all the toys we need to save sight and lives if we use them at the right time.