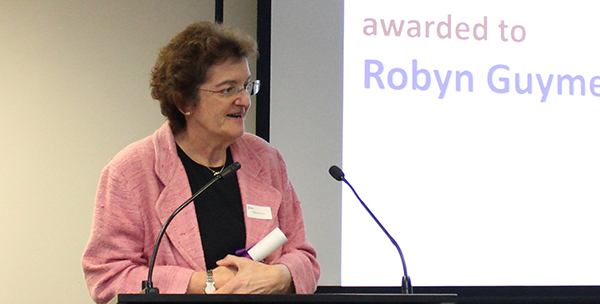 Ophthalmologist Professor Robyn Guymer received the annual CERA Award for enhancing the organisation, at the Centre for Eye Research Australia Scientific Exchange on 31 May.

Professor Guymer is the deputy director of CERA, leading a team of 20 researchers primarily investigating age-related macular degeneration. Outcomes from her research include the Laser intervention in Early Age-Related Macular Degeneration (LEAD) study, the Bionic Vision Australia project and an app for testing AMD.

The managing director of CERA, Professor Jonathan Crowston, said Professor Guymer was a world renowned clinician who encompassed everything that was great about working at CERA.

The TGA is changing the names of about 200 medicines in Australia to make them consistent with international names.

There is a four-year transition period to allow health professionals, manufacturers and patients to adjust to name changes. A few medicines that are more frequently used or carry higher risks will have seven years to transition and will have dual labelling during this time.

Adrenaline will always be known as adrenaline (epinephrine) because of its use in life-threatening situations such as anaphylaxis.

Jerry Yik said in Australian Prescriber that the move would improve medication safety.

Nearly one per cent of Australia’s registered health practitioners are optometrists, Optometry Board of Australia statistics show.

There were 339 new applications for registration as an optometrist and registration for the optometry profession grew by 4.6 per cent from 2014-2015. Student registration increased by 3.9 per cent to 1,652 registrants.

Read the summary and other OBA news in the OBA’s May 2017 newsletter.

Many novelty contact lenses which are not used to correct vision problems contain microbes and are potentially harmful to eyes, a US study shows.

Of 29 different brands of non-corrective contact lenses examined, 48 per cent had at least one sample positive for microbial contamination. The contact lenses were obtained without prescription from an optometrist or ophthalmologist and were mainly bought from the internet or novelty stores.

Researchers studied the accuracy of GAT correction equations, and whether there was an association between glaucoma stage and discordance of GAT and dynamic contour tonometry IOP readings.

They concluded that in the management of patients with glaucoma, measurement inaccuracy associated with GAT must be taken into account but GAT correction equations still involve the risk of unpredictable measurement errors.

Microsimulation model analysis was applied to simulated cohorts of 100,000 people with keratoconus assigned to cross-linking or transplant at age 25 years, with an estimated lifespan to a maximum 110 years.