Pregnancy and glaucoma is the cover story of the June issue of Pharma, which also features a broad discussion of issues related to cataracts and foreign body removal.

A majority of cases of glaucoma in pregnant women are treated with topical anti-glaucoma medication, despite the lack of strong evidence on management in these cases. Jack Phu and Dr Alex Hui survey the clinical data and discuss the risks and benefits of current treatment recommendations, and give guidance on what and when to prescribe.

Dr Anna Palagyi and Dr Lisa Keay review the significant negative physical and psychological impact on Australians in the public system waiting for cataract surgery, resulting in falls and depression.

The June issue features an informative discussion between Associate Professors Mark Roth and Graham Lee on the next generation of non-steroidal anti-inflammatory drugs (NSAIDs). Nepafenac 0.3% is the new NSAID for cataract surgery, and Roth and Lee discuss the features that differentiate it from other NSAIDs.

Printed copies of the magazine will be mailed to members.
A PDF of the issue is also available on the Optometry Australia Archive. 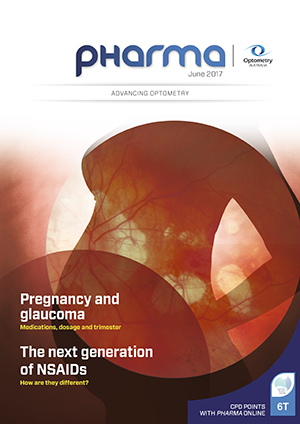