A Community Eye Care project trial, known as C-Eye-C, in Western Sydney is extending to December 2017 after an initial trial period of January to March 2017.

The project is a finalist in the Western Sydney Local Health District Quality Awards, which are to be held on 7 September.

Optometrist and practice owner Joseph Nazarian from Nazarian Optometrist in Blacktown, and optometrists Margaret Nguyen and Bendy Ng from PersonalEyes in Parramatta were involved in the initial 12-week trial.

Their role was to assess diabetic retinopathy and glaucoma patients referred to them by Westmead Hospital and recommend a patient management plan in a bid to reduce the long wait for patients to see an ophthalmologist in the public system.

Ophthalmologists at Westmead then reviewed the optometrist’s assessment and confirmed the diagnosis and management plan. Patients were then discharged to a local optometrist, referred back to the community clinic in Blacktown or Parramatta for a follow-up review, or reviewed at Westmead.

The trial extension, Phase 2, began at the end of June. Phase 2 is expanding the focus to continuity of care for patients requiring follow-up, and refining processes for adaptability at other sites.

Mr Nazarian, Ms Nguyen and Mr Ng are continuing their involvement in Phase 2.

C-Eye-C project leader, Associate Professor Andrew White, and service co-ordinator Belinda Ford presented the results of the initial 12-week trial to the Agency for Clinical Innovation (ACI) ‘Eyes on the Future’ forum in Sydney on 9 June. They will also be presenting at the Health Services and Policy research conference on the Gold Coast in November.

The C-Eye-C team has also held discussions with Optometry NSW/ACT about the project’s extension.

‘We met with Margaret Lam, Christine Craigie and Andrew McKinnon recently and the feedback is good,’ Professor White said. ‘We are working at standardising what collaborative care means and keeping guidelines in line between optometry and ophthalmology based on the existing published guidelines. Other health districts in New South Wales are also expressing interest in the model, as is New Zealand.’

During the January to March trial period, 241 patients were assessed.

The C-Eye-C project has been modelled on similar schemes in the United Kingdom, which have been successful in better managing patients with glaucoma.

In Australia, the C-Eye-C collaborative care model between optometrists and ophthalmologists has been centrally co-ordinated by Westmead Eye Clinic, and supported by the ACI. 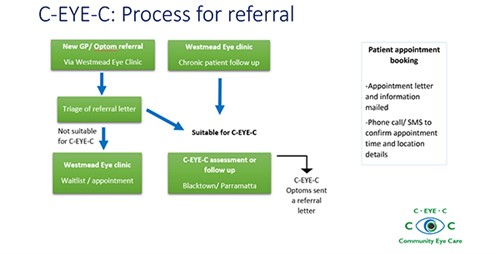 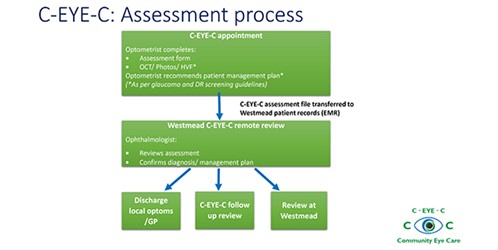 Optometry Australia reported on the launch of the C-Eye-C Project in January 2017.