Anjou made Member of the Order of Australia

On Australia Day in January, optometrist Mitchell Anjou became a Member of the Order of Australia for his services to optometry and public health. OAA launched a comprehensive campaign to ask the Australian Government to remove the Medicare fee cap for optometry. Local federal members of parliament were ‘flabbergasted’ and ‘incredulous’ to learn first-hand from optometrists of the fee cap restricting their profession. Professor Brian Layland, synonymous with advancing optometry throughout Australia, was the guest of honour at a lunch in Sydney in March to celebrate his 57 years of service to the association and the profession. 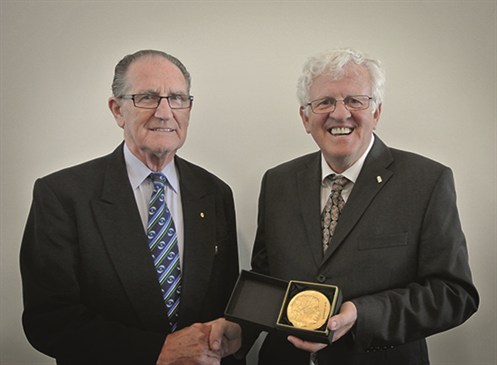 Margie O’Neill recalls her 17 years working in the outback, in a ‘practice’ covering one million square kilometres, flying in the mail plane and living in a car in outback Australia to deliver services to her patients.

Southern Regional Congress attracted 972 optometrists and 51 exhibitors to its three-day mix of education and exposition in Melbourne on 1-3 June. CEO Genevieve Quilty stands to ask a question of the Coalition about eye health care at the Vision 2020 Summit in Canberra. Tasmania Lifestyle Congress registrants in August were invited to a reception at Hobart’s Government House to mark the 100th anniversary of the Opticians Act. A small but united group of Tasmanian optometrists defeated their detractors when the legislation was passed in Tasmania’s Parliament in 1913 to instate optometry as a profession. Researchers in Western Australia are reviewing eye injuries in Australian children and hope it will lead to strategies to reduce injuries. Associate Professor Mark Roth, Dr Laura Downie and Dr Josephine Li were presented with Fellowship of the American Academy of Optometry in October. Australian optometrists received a swag of prestigious awards at the academy’s annual meeting in Seattle, cementing their place on the world stage. Western Australia Division awarded life membership to Perth optometrist and indigenous health campaigner Graham Fist. Sixty years after starting in the family practice, Mr Fist still works full-time between his city and Kalamunda practices, and works one day a week at the Royal Perth Hospital Eye Clinic where he is the longest serving optometrist.