Stories were shared and memories celebrated at the first reunion of former Diploma of Optometry students from the University of Western Australia on 4 December in Perth.

Reunion organisers, Perth optometrist Ian Sim and Queensland optometrist Dr Lewis Williams, said the four-year Diploma of Optometry course ran for nearly 20 years at the university, from 1947 to 1968, but in some years there were gaps and no students.

The function was held in the university’s Physics Atrium where most of the optometry studies had occurred and was hosted by current UWA Head of the School of Physics, Winthrop Professor Ian McArthur.

Ian Sim, who graduated with the first Bachelor of Optometry from the University of New South Wales in 1965, was drawn into checking out the UWA Diploma of Optometry history after preparing an obituary for Don Noack last year. This led to the discovery of a lack of historical recognition and a search for former students to tell their stories before it was too late.

Queensland optometrist and historian Lewis Williams was the driving force anxious to fix the records and together the pair sent questionnaires to all graduates contactable, with the help of the university’s archive, so the pair could record their recollections.

Lewis plans to archive the information and publish a formal history and Ian is the local link for information from the UWA archives.

‘The history of the course has never been told so we are trying to document what we can,’ Ian said. 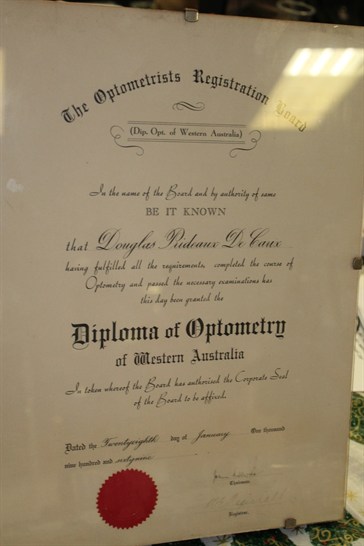 They tracked down 23 former optometry students. Some had died, others were in care, ill or unable to attend but 12 attended the reunion.

Those unable to attend sent best wishes including two of the original students who finished in 1952, Clive Abernethy and Betty Carter (nee Nelson) from Melbourne.

John Shilbury, Murray Louden and Sol Raiter were also unable to attend and Les Wende sent best wishes from Israel and will catch up when visiting Perth in January with his scrap book. 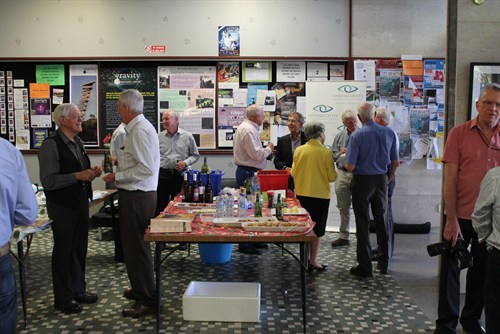 Ian said the students were not recognised as UWA alumni because the Diploma of Optometry was run by the Optometry Registration Board of WA and conferred by the Board.

As part of the course, students worked part-time in an optical workshop learning lens skills of those days.

Low numbers may have led to the course closure as there were only two students in one year and in some years there were no students.

‘The reunion was a great success. There were many memories,’ Ian said.