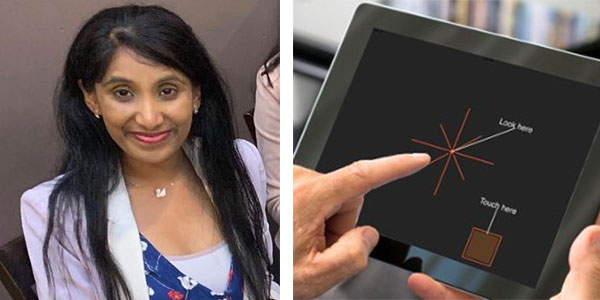 A Melbourne optometrist’s research in stroke patients may help pave the way for optometrists to work in hospital neurology wards and use an app to detect vision problems earlier after stroke.

Chamini Wijesundera used an iPad at 160 patients’ bedsides to assess visual changes after acute ischaemic stroke within two to three days of admission to Sunshine Hospital. She analysed data in 60 of the patients and is the first to use the portable perimetry app to reveal vision deficits as early as 48 hours post-stroke.

The study confirmed the value of the Melbourne Rapid Field-Neural App (MRF-n) as a quick, reliable and easy way optometrists can do perimetry and visual acuity tests for screening and follow-up in neurological disease in their practice, hospital or working in the field. This could also be used in patients with optic neuritis from multiple sclerosis, idiopathic intracranial hypertension or Parkinson’s Disease.

‘Results indicated that visual dysfunction is associated with a more generalized cerebral disorder following stroke and highlights the need for testing of vision in stroke patients,’ she said.

Chamini, who works at Keilor Downs Specsavers, is undertaking a PhD in neuro-ophthalmology at La Trobe University with Professor Sheila Crewther in collaboration with the Department of Optometry and Vision Sciences at the University of Melbourne with Professor Algis Vingrys. She was invited by neurologist Professor Tissa Wijeratne to do the study at Sunshine Hospital as part of her PhD research.

‘Findings confirmed most patients with first episode ischaemic stroke retained normal high contrast visual acuity (except for five cases who had one to two line reduction), 62 per cent showed deficits in visual acuity-in-noise and 68 per cent had a loss in visual fields with most having hemianopia.

‘Despite these losses in vision and the stroke induced physical deficits, 44 per cent were unaware of any visual loss or of their altered visual capacity (acuity-in-noise and visual field loss). A similar number showed reduced capacity for eye-hand tracking.

‘These findings have been shown before but generally at one-month post stroke; my findings are one of the first studies to show this as early as 48 hours after stroke. Hospitalised stroke patients are usually very sick and such findings are generally not confirmed until at least a month after with a Humphrey Field Analyser done at an optometry or ophthalmology practice.’

The app was like having a portable mini Humphrey Field Anaylser on site, she said. 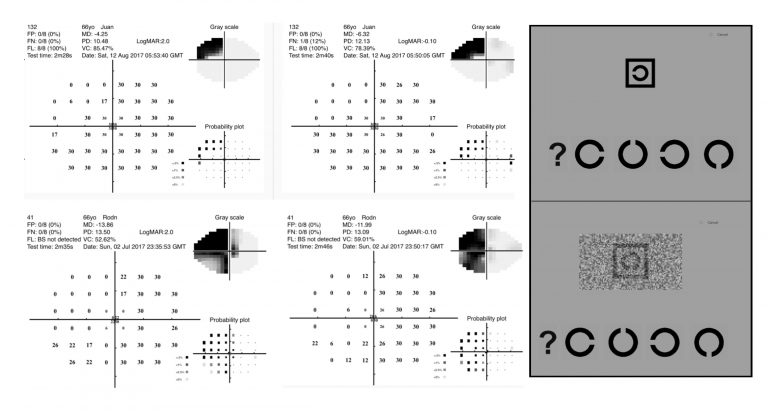 Professor Vingrys and Dr George Kong developed the MRF App  which has been further refined into four versions for neurology, glaucoma, AMD and diabetes.

‘Visual acuity in noise had not been tested post stroke before,’ Chamini said. ‘Testing for normal high contrast VA didn’t tell much about visual status which is what is normally done, but testing VA in noise was much more sensitive in diagnosis. VA in noise was significantly affected in a majority.’

Normal high contrast VA involves a large black letter with a white background but VA in noise involves the letter within a crowded background and many small black pixels.

‘The neurologist found my input valuable because there is no ophthalmologist or ophthalmology unit at the hospital and screening the patients’ vision should help in their rehabilitation as early detection is always best for good prognosis in rehabilitation and recovery,’ she said.

‘The main reason I was asked to do the research by the neurologist was that much of the time posterior strokes are missed. They can easily be missed because symptoms include headache and affected field of vision. The study found 44 per cent were not aware a field of vision had been lost.

‘More people are aware of signs in classic stroke such as when the face droops and speech slurs so they get to hospital faster but in posterior stroke, it is visual and a headache and they might think it’s a migraine, and present to hospital later. They may not be referred for visual field testing to an optometrist until much later.

‘Diagnosing stroke and starting treatment as early as possible means less duration of ischemia and less vision loss because of reduced effects on the blood supply to the brain.’ 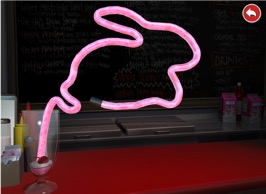 Hope more optometrists will use in neurological patients

Chamini hoped her findings would lead to more optometrists using the app in stroke patients in hospitals, their own practices if suspicious of stroke in patients, and on existing stroke patients.

‘The portable aspect is useful for optometrists who work at several practices, visit rural locations or work in GP rooms or hospitals as they can do the examinations without a large VF machine by taking their iPad wherever they go.

‘It enables optometrists to easily follow-up patients with neurological diseases such as chronic intra-cranial hypertension, optic neuritis due to multiple sclerosis or degenerative causes of brain dysfunction such as Parkinson’s Disease.

‘They can follow-up patients three or six months later to see if there is change in field of vision. Often if a patient is young or stroke treatment was delivered early there may be improvement in vision.’

The research helped Chamini, as a member of Optometry Victoria/South Australia, to win its ECO Education Grant (Victoria) 2019.  She also received the NOSA 2018 Best Poster Presentation at the annual Neuroophthalmology Society of Australia Conference.

Practitioners can buy the MRF- Neural App or MRF-n by searching for it on the Apple App Store. Optometrists can download a free trial version of the software on their iPad by searching for MRF Neural Lite, MRF Glaucoma Lite, MRF Macular Lite or MRF Diabetes Lite in the Apple App Store. Full versions of the Apps can be bought via the App Store. There is a fee per test session and test credits can be purchased through the distributor Designs for Vision by contacting Cameron Loveless at cameron.loveless@dfv.com.au or on 0427 533 343.

A 25 per cent discount on test credits is available to Optometry Australia members. The app is free for researchers.

Read also a summary of Chamini’s findings and a Good Vision for Life story on the technology.