Members of Parliament had their eyes examined to mark World Diabetes Day at an event in Canberra on 23 November.

Optometry Australia CEO Genevieve Quilty said the event was a platform for the organisation to discuss issues in the eye-care sector with Members of Parliament.

‘The event brought together two Parliamentary Friends groups to talk about the importance of regular preventative eye health for people with diabetes. The commencement of a new item for GPs to screen for diabetic retinopathy was also noted,’ she said.

‘The key aim of the event was to promote early detection of diabetic eye disease. This event allowed discussion with many politicians with an interest in eye care from all sides of politics, and about the role of optometrists in this early detection.’

The Eye Health and Vision group is co-chaired by Amanda Rishworth and Dr Andrew Laming; Rowan Ramsay and Graham Perrett co-chair the Diabetes group. They opened and closed the event. 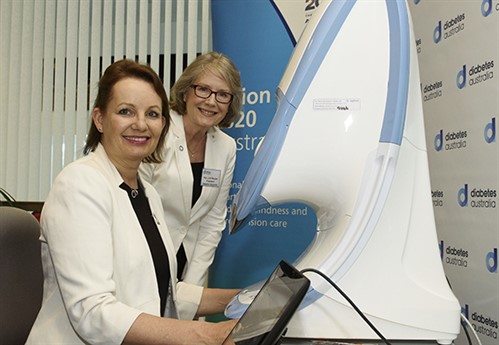