Usher syndrome is the focus of the Centre for Eye Research Australia’s 2016 Christmas appeal which features Harry and Louis, two Melbourne boys with the condition.

CERA Associate Professors Alice Pebay and Alex Hewitt are leading a team using stem cell technology to determine how eye cells become damaged and lead to blindness. A skin sample from a person’s forearm can be turned into eye cells, allowing a better understanding of inherited eye diseases and testing of new drugs.

‘CERA’s research gives us hope that the boys can have a brighter future,’ the boys’ mothers Emily and Hollie said.

Make a donation to the appeal

Tania Savona from Ormond, Victoria was the grand-finalist and macular disease category winner with her photo of ballerinas.

George &amp; Matilda has acquired 31 independent practices Australia-wide since its launch in May 2016. 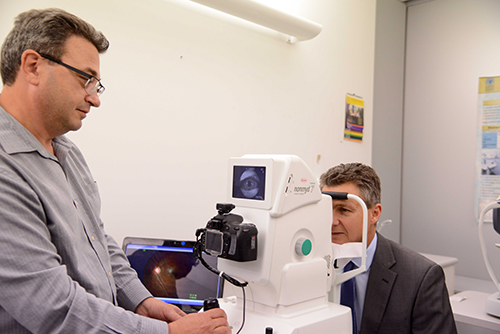 The Member for Kingsford Smith, Matt Thistlethwaite, visited the Brien Holden Vision Institute to have a retinal examination for World Diabetes Day this week.

Institute chairman, Professor Brian Layland, says there may be as many as 1.6 million Australians with diabetes and as many as one in two are unaware that they have the condition.

Alcon’s new Dailies Total1 consumer campaign will peak during November and December, with advertising on television, websites and shopping centres, and in-practice promotions.

The campaign, with the tagline ‘The lens that feels like nothing’, launched in October and will conclude in March.

Throughout November and December, 30- and 15-second advertisements will appear on television channels, digital banners will be posted on targeted websites, digital and static advertisements will appear in more than 300 shopping centres, and 2,000 $100 eftpos cards or Visa gift cards can be redeemed in-practice for purchasing two packs of 90 lenses.

The Optometry Board of Australia has replaced two committees with one, following a review of its committee structure.

The Policy and Education Committee will take over the regulatory work of the Policy, Standards and Guideline Advisory Committee and the Continuing Professional Development Accreditation Committee.

A specially designed action-oriented iPad game is more effective in treating children with amblyopia than the standard treatment of eye-patching, an American study has found.

The game requires children to wear special glasses that separate game elements seen by each eye and can be completed only if children use both eyes.

Half the 28 children played the game for one hour a day, five days a week and the other 14 had patching. After two weeks, the change in amblyopic eye best-corrected visual acuity was greater with the iPad game than patching and the average visual acuity improvement was more than double the improvement found with patching, and achieved in less than half the time: 10 hours versus 28 hours.

While 39 per cent playing the game reached 20/32 or better visual acuity, only seven per cent with patching did, researchers reported in JAMA Ophthalmology.

Oculo was created by the Centre for Eye Research Australia and is used by 800 optometrists across Australia.

In a statement, Oculo CEO Dr Kate Taylor said: ‘Oculo is working to connect all providers of eye care, including ophthalmologists, optometrists, GPs and hospital eye services. We believe that better communication will mean better care for patients.’