Optometry Australia’s award-winning journal, Clinical and Experimental Optometry, is celebrating its centenary this year and is going stronger than ever, attracting more than 400,000 downloads of papers annually.

Ranked one of the top three optometry journals in the world, the March 2019 issue, out now, marks 100 years since publication of the first issue.

Clinical and Experimental Optometry is the leading peer-reviewed journal of original optometric and vision science research and reviews in the Asia-Pacific region and keeps our members and others in the world of vision up to date with advances in optometry, clinical case reports and research.

It has grown from a small journal of news and commentary when first published in 1919 to an internationally respected scientific journal that attracts more than 400,000 downloads of papers per year and makes an important contribution to the continuing professional development of members.

The journal is published online six times a year, where it is circulated to 8,900 readers, including members of affiliated associations and consortia libraries.

Its centenary is not to be confused with its 100th volume, which was published in 2017.

The 100th year anniversary also follows hot on the heels of Optometry Australia’s centenary in 2018.

The journal’s founding editor William G Kett, who remained editor for 42 years until his death in 1962, wrote many of its papers in the early days. 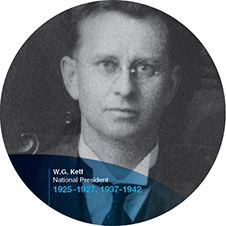 ‘There are many reasons why the journal has survived 100 years,’ he told Optometry Australia. ‘One key reason is the tremendous contributions of editors and authors over the years, and in this regard, two individuals stand out.

‘Two optometrists, William G Kett and David Cockburn, published at least one editorial, article, commentary or other contribution in the journal every year between 1919 to 1962, and 1959 to 2015, respectively.

‘Remarkably, these sustained contributions combined span almost the entire 100 years of the journal.

‘It is imperative that the profession maintains a scientific journal – not only for the scientific and clinical information it contains, but as a symbol of the professional status of optometry,’ Professor Efron said.

‘I say this because a group of like individuals only has the right to consider themselves as a ‘profession’ if they research the foundations of what it is that they do. In this regard, Clinical and Experimental Optometry is our ticket to legitimacy and respectability.’

Listen to Editor Professor Nathan Efron talk about the journal

History of the journal

When Optometry Australia launched its newspaper Australian Optometry in February 1980, the journal became a purely scientific, peer-reviewed publication. Editorship moved from practitioners to academics who developed a strong research component.

In 1986 the journal was renamed Clinical and Experimental Optometry and it ceased print publication with the final hard copy edition, a special issue on Myopia Control, published in November 2015.

Originally called the Commonwealth Optometrist, it has changed names and formats several times.

CXO is also the official journal of the New Zealand Association of Optometrists, the Hong Kong Society of Professional Optometrists and the Singapore Optometric Association. It has an impact factor of 1.335, ranks 45/56 (Ophthalmology) and is co-edited by deputy editor Dr Maria Markoulli.