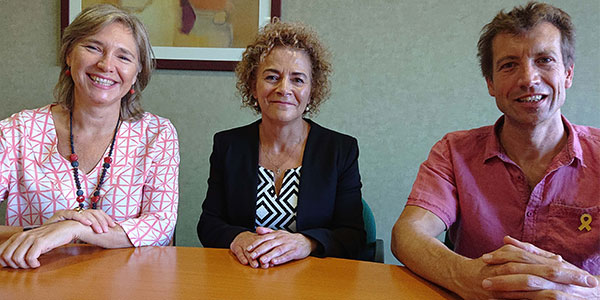 Professor Joanne Wood is the first woman to receive the International Optometrist of the Year Award from a Spanish collaboration and also recently received a prestigious international ergonomics award.

Throughout her career, Professor Wood from the School of Optometry and Vision Science at QUT, has received more than 20 prestigious international awards for her work on the impact of visual impairment, ageing and driving.

The Spanish optometry collaboration, including the College of Optometrists of Catalonia, the Catalan Association of Optometry and Vision Therapy, the Terrassa School of Optics and Optometry, and the Universitat Politécnica de Catalunya, Barcelona with the support of the Facultat d’Òptica and Optometria of Terrassa (FOOT) awarded her its International Prize for Optometrist of the Year 2019.

‘Receiving the award was an amazing experience,’ Professor Wood said. ‘I was lucky enough to travel to Barcelona to receive the award during the opening ceremony of the academic year in the most beautiful ancient church within the complex of Seu d’Egara, Terrassa.

‘What was particularly special was the opportunity to deliver a speech to the first year optometry students regarding the importance of the profession and of making a difference, not only in their professional and academic lives, but in the world beyond.’

The annual award is given to an optometrist of recognised international prestige who has excelled in academic, research, professional and social impact during recent years.

‘What was particularly exciting was that I am the first woman to receive this international award, which was highlighted in the ceremony and also in the interviews I had with local television and newspapers,’ she said. 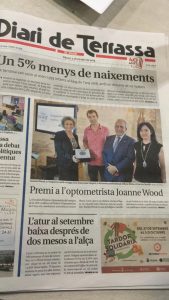 Professor Wood graduated with first class honours in optometry from Aston University, UK and spent two years in optometric practice before returning to complete a PhD. She recently received the Doctor Honoris Causa (Honorary Doctor of Science) from the university. She then took up a Post-Doctoral Research Fellow position at Oxford University before coming to QUT, where she has held a series of leadership roles and is currently Professor in the School of Optometry and Vision Science.

She is internationally renowned as a leader in vision, ageing and driving. Her research career has focused on the impact of visual impairment in driving, and she has contributed significantly with hundreds of publications in international refereed journals, book chapters and conference presentations.

One of her greatest achievements has been to translate the results of her research into road policies and health practice, while advising organisations and professionals about road rules and standards for obtaining driving licences.

Watch this video in Spanish of Professor Wood receiving the international optometry award, which Professor Konrad Pesudovs from Adelaide received in 2018. The Human Factors and Ergonomics Society presented its 2019 Hal W. Hendrick Distinguished International Colleague Award to Professor Wood, in recognition of her outstanding contributions to the human factors and ergonomics field.

The award was presented at the society’s international annual meeting in Seattle USA in October 2019, and recognises a non-US citizen who has made outstanding contributions to the human factors and ergonomics field.

‘Many of my collaborators are from the human factors area and have made a huge contribution to the research outcomes from our team. Receiving this award was a wonderful acknowledgement of those collaborations and also reflects very positively our research team more broadly and for QUT.’